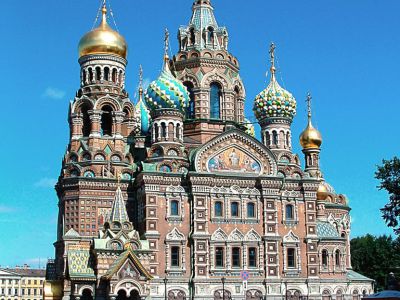 Church of the Savior on Spilled Blood, St. Petersburg (must see)

The Church of the Savior on Spilled Blood (Russian: Tserkovʹ Spasa na Krovi) is a former Russian Orthodox church which today functions as a secular museum. Built on the spot where political nihilists assassinated Alexander II, it represents a monument to the late Tsar.

On March 13, 1881 as Alexander II's carriage passed along the embankment, a grenade thrown by an anarchist conspirator exploded. The tsar, shaken but unhurt, got out of the carriage to remonstrate with the presumed culprit, at which point a second conspirator threw another bomb, mortally wounding the Tsar who died a few hours later in the Winter Palace.

Funded by the Romanov Imperial family and private donors, the church's construction began in 1883 under the reign of Alexander III and was completed under Nicholas II in 1907. It ran well over the initial budget of 3.6 million rubles to over 4.6 million.

The project was led by architect Alfred Alexandrovich Parland, assisted by some of the most celebrated Russian artists of the day—Viktor Vasnetsov, Mikhail Nesterov, and Mikhail Vrubel—who created the interior. The latter boasts 7,500 square meters of intricately detailed mosaics—more than any other church in the world—and depicts biblical scenes and images of saints. Architecturally, the cathedral contrasts the predominantly Baroque and Neoclassical architecture of Saint Petersburg, and harks back to the medieval Russian style in the spirit of romantic nationalism.

In the aftermath of the Russian Revolution, the church was ransacked and looted, and then shut down in 1932. During the Siege of Leningrad in WWII, it was used as a temporary morgue. After the war, the building served as a warehouse for vegetables, leading to the sardonic name of “Savior on Potatoes”. In 1970, it was converted to a museum and then underwent thorough restoration funded with proceeds from St. Isaac’s Cathedral. The church was finally reopened in August 1997, but has not been re-consecrated and does not function as a full-time place of worship.

Why You Should Visit:
One of Saint Petersburg's major attractions and possibly the most photographed local temple. Great location to walk to, with beautiful views abound. You can go inside for a fee, if time allows.

Tip:
Try wandering into the Mikhaylovski Garden next door for some picturesque views.