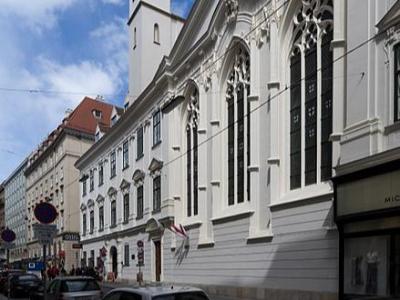 Tucked away in a side street not far from St. Stephen's Cathedral, this is a small, quirky and lesser visited church belonging to the Order of Teutonic Knights – one of the three main military-religious orders to emerge during the Crusades in the 12th century. The building never fell prey to the baroque frenzy that swept the city after the Counter-Reformation, so you can see it pretty much in its original form – a Gothic church decorated with the Order's numerous coats of arms.

Enter through the arched gateway into the cobbled courtyard – a peaceful spot adorned with ivy and flower boxes, where Johannes Brahms spent the best part of 1863–65, though inevitably it's Mozart who gets a plaque for his brief sojourn here in the spring of 1781 (March 10th to May 2nd). Despite the span of only a few weeks, this was to be a crucial period for the then 25-year-old composer's future, who lived in Salzburg and was in the service of that city-state's ruler, Prince-Archbishop Count Colloredo. During a Vienna visit by the Archbishop and his retinue, Mozart had a row with him and resigned his commission, instead deciding to stay in Vienna where he worked his way up from an unemployed artist to a respected and prosperous pianist, composer and music teacher.

Before you leave, pop inside the ground floor's Sala Terrena to admire the Baroque trompe l'oeil murals of flowers, animal scenes, statues and carousing gods; the room was where Mozart gave concerts for the Viennese aristocracy (even some of his premieres were at this very place) and is now used for concerts of his works.

Tip:
The treasury – one of the oldest in Vienna – is open less frequently than the church, but well worth checking out for a small fee as it displays various fine collections acquired by the Order's Grand Masters over the centuries. Apparently, too, you can stay in the adjacent "hotel" owned by the Order – one of the cheapest places in central Vienna, albeit cash-only and somewhat hidden (you'd have go up some stairs to find it).