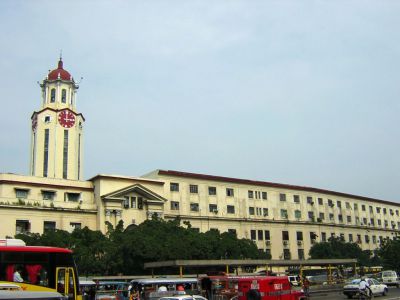 The City Hall of Manila is one of the most distinctive landmarks of the city. The City Hall is open to the public from 9am to 5pm, Monday through Friday. The City Hall got negative reviews in the early days, because of its lack of architectural design, absence of an entrance, and random placement of the clock tower. Today, many people praise the City Hall and its design for the same reasons the complex was once vilified. The building proper has a shape similar to a coffin, or on the other hand, it's like the shield of a knight, only it lacks symmetry and regularity. Various services offered by the government can be accessed at the city hall. The Clock Tower is Illuminated by lights at night. On April 15, there was a bomb threat at the city hall. This event led to heavier security there.
Image by Jhun80 on Wikimedia under Creative Commons License.
Sight description based on wikipedia