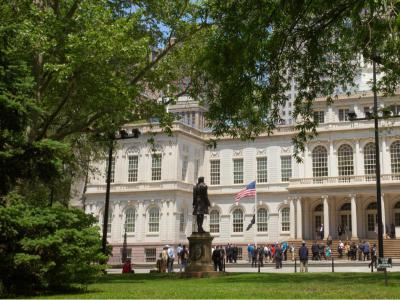 While Boston and Philadelphia are thoroughly steeped in revolutionary history, New York’s contribution to the American independence is little noted despite the greatest price it had paid in terms of death and human suffering. Part of New York’s revolutionary heritage is closely associated with City Hall Park, a public park surrounding New York City Hall in the Civic Center of Lower Manhattan. During the Revolutionary era this part of the city was the site of many rallies and movements.

The Declaration of Independence may well have been enacted in Philadelphia, but the first soldiers rising bravely to the defense of American liberty were in New York. On July 9, 1776, the word of the newly signed Declaration reached George Washington, upon which he gathered his men on the New York Common, now City Hall Park, and had the Declaration read out to them, exhorting the troops to be worthy of the newly independent nation whose uniform they wore.

The very first blood of struggle for the cause was shed on the New York Common on August 11, 1766 during the so-called Liberty Pole Dispute in which the Sons of Liberty (a secret revolutionary organization advancing the rights of European colonists in American Colonies) erected the first Liberty Pole, a commemorative mast topped by a vane, featuring the word “Liberty”, outside barracks of the British occupation force. Although the soldiers had it chopped down, the post was repeatedly replaced – five times in total. A replica dating to 1921 now stands near its original location between City Hall and Broadway. On November 9, 1783, after the American troops recaptured the Civic Center, George Washington raised the American flag in the park for the first time.

Also the park houses a monument honoring America's most famous Revolutionary era martyr, Nathan Hale, a 21-year-old American spy. A graceful, 13-foot bronze statue set upon a granite base, facing directly the City Hall, illustrates the last moments of the hero shackled and bound, and is inscribed with the last words he had uttered prior to being hung by the British,“I only regret that I have but one life to lose for my country.”
Image Courtesy of Flickr and Jeffrey Zeldman.