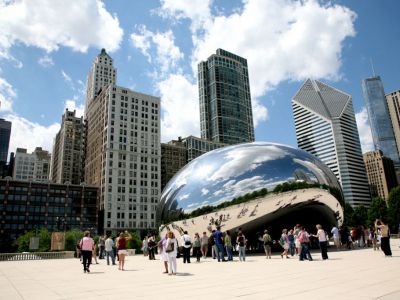 Cloud Gate is a public sculpture, centerpiece of AT&T Plaza at Millennium Park, constructed between 2004 and 2006. Made entirely of stainless steel – 168 plates welded together and polished to conceal the seams – the sculpture stands three stories high, measuring 66 feet long, 33 feet high and 42 feet wide, and weighting 100 tons. It has been lovingly dubbed by the locals as "The Bean," although the design is said to have been inspired by a drop of mercury. Concave at the bottom, it creates a spectacular fun mirror effect for those walking underneath, reflecting distorted images of the Chicago skyline.

At the time, prior to its installation, the sculpture was subject to a controversy among experts, some of whom believed it could not be implemented because of the technological difficulties associated with its construction, assembly, upkeep and maintenance. Although a feasible solution was eventually found, the project fell behind schedule and was still unfinished by the time Millennium Park was opened in 2004. Cloud Gate was completed and formally dedicated only on May 15, 2006, and has since enjoyed great acclaim, both at home and abroad.

Why You Should Visit:
Fascinating piece of artwork that allows to playfully take pictures at different angles and with amazing backgrounds.

Tip:
Visit on a sunny day for better photos. Note that on a rainy day if there's a thunderstorm, you won't even be allowed near the sculpture as it poses a risk of electrocution!
Image by Leeadlaf on Wikimedia under Creative Commons License.