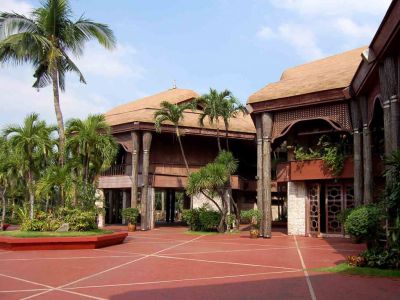 The Tahanang Pilipino (Filipino home), otherwise known as the Coconut Palace, is located at the heart of the Cultural Center of the Philippines complex in Manila. The Palace was built in 1978 by Francisco Mariosa for Pope John Paul II’s visit in 1981. Ironically, the Pope did not step into the Palace since he considered it to be flamboyant for the poverty-stricken country. The Palace initially served as the Presidential Guest House of Ferdinand Marcos, the former Philippine dictator, and was commissioned by his wife Imelda Marcos in 1981. Today, this Palace serves not only as an official residence of Vice President but also as a venue for romantic wedding receptions.

The Palace is famous for its design and extraordinary features. 70% of this octagon shaped structure is made of coconut lumber along with coconut shells and a variety of Philippine hardwood. The roof is shaped like a hat, or the traditional salakot. The 101-coconut chandelier and the dinning table with 40,000 inlaid coconut shell pieces are the highlights of this palace. Named after various provinces of the country are the 7 palatial rooms, namely: the Zamboanga, the Pampanga, (made of Jusi fibers and displays statues of Kampampangan style of art), the Marawi (purple and green colored room representing Muslim Mindanao), the Bicol, the Mountain Province room (a room full of artifacts traditional to Ifugao or Cordillera tribe), the Iloilo, and the Pangasinan (made of Pina fibers) rooms. The Palace also has a colossal swimming pool, a beautiful butterfly garden and an orchidarium. During its history, the Palace has accommodated a number of honorable guests including George Hamilton, Brooke Shields and Muammar al-Gaddafi.
Image by Paul Shaffner on Wikimedia under Creative Commons License.