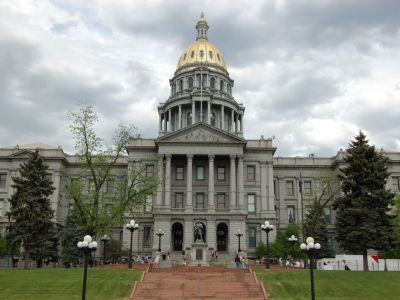 The Colorado State Capitol, located east of Civic Center Park, was designed to mimic the appearance of the United States Capitol in Washington, D.C. It was constructed in the 1890s using Colorado white granite for the building's exterior and genuine gold leaf for the dome.

The interior of the State Capitol is just as stunning as the exterior. Architect Elijah E. Myers used white yale and rose marble excavated from within the state. Stained glass windows adorn much of the Capitol including its rotunda. The Gallery of Presidents include portraits of each President of the United States.

A number of sculptures are also located throughout the building. Visitors should look for busts honoring Colorado's most famous public servants. They can also find artifacts from the early days of the building's construction. Those who greatly desire seeing all art and artifacts should be sure to plan their trip in advance as some of these artworks can only be seen while on a guided tour.

One of the most notable features of the Capitol building is the mile high marker. Originally engraved on the fifteenth step, this was noted as the spot in the city that was exactly one mile above sea level. New surveys have been conducted over time, which have led to two additional markers on the 13th and 18th steps.

The Capitol building is an active, working government facility. As such, visitors may be able to see legislators, law-makers or even the governor while they are touring the facility.

Why You Should Visit
The Colorado State Capitol is among the most notable buildings in the state. It is also known throughout the nation for its beauty and grandeur.

Tips
Visitors are welcome to take a self-guided tour of the Capitol building or they can join a public group tour. Visitors can schedule tours in advance to ensure they can see the dome.
Image Courtesy of Wikimedia and cris gonzales.