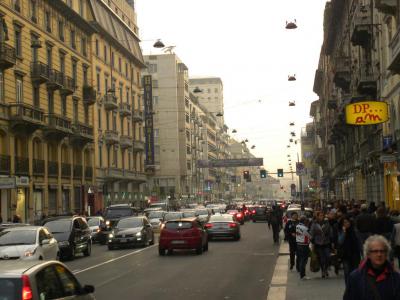 Corso Buenos Aires is yet another major thoroughfare in Milan. With over 350 shops and outlets, this is one of the busiest streets in the city, and even more so during the Christmas holidays, when the sales of decorations get in full swing. Unlike Via Monte Napoleone and the surroundings of Piazza Duomo, that are specialized in haute couture (high fashion), Corso Buenos Aires is generally more oriented towards mass products, such as ready-to-wear type clothes – it features the highest concentration of clothing stores in Europe!

It is also the longest shopping artery of Milan, stretching for about 1.2 km from the Duomo to the nearby city of Monza. The architecture of the area is mostly late 19th- and 20th-century style; the street and its surroundings are pointed with several neoclassical and art nouveau buildings.

The modern Corso Buenos Aires developed from the "stradone di Loreto", an old road connecting the centre of Milan to Monza. In the 19th century, the road used to be called "Corso Loreto"; one of its prominent features was the Lazaretto, which is also mentioned in Alessandro Manzoni's novel The Betrothed; it was demolished in the late 19th century. Approximately in the same period, the horsecars that served this route were replaced by trams. In 1964 the trams themselves were abolished and the railway dismantled, being replaced by modern subway line.

Once known for the numerous small shops selling traditional Milanese goods, Corso Buenos Aires today is mostly associated with modern fashion outlets. Likewise, some of its ancient buildings have been replaced by modern, high-rise blocks of flats.

Local prices, on average, are accessible. During sales periods, after Christmas and in mid-summer, the street attracts shoppers with colorful price tags and becomes a great place for bargains. Once here, you stand a pretty good chance of leaving loaded with bags of goodies. It is rightly said of Corso Buenos Aires that it will make you “shop till you drop.”
Image Courtesy of Flickr and JasonParis.
Sight description based on Wikipedia.