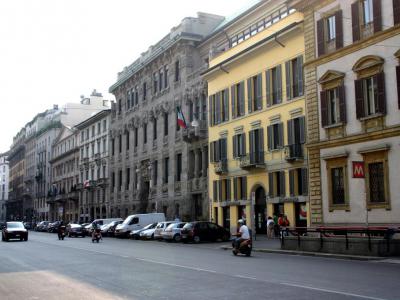 Corso Venezia is one of the city's most exclusive and elegant avenues, being part of the city's upscale Quadrilatero della moda shopping district, along with Via Monte Napoleone, Via della Spiga, Via Sant'Andrea and Via Manzoni. It also boasts a great collection of historic palaces, parks and gardens.

The former – notably Baroque and Neoclassical, but also Medieval and Renaissance – such as the Palazzo Serbelloni and the Villa Reale, are found in the landscaped Giardini Pubblici along the street. The garden also houses the Museo Civico di Storia Naturale di Milano, which was founded in 1838 when Giuseppe de Cristoforis (1803–1837) donated his collections to the city.
Image Courtesy of Wikimedia and G.dallorto.
Sight description based on Wikipedia.