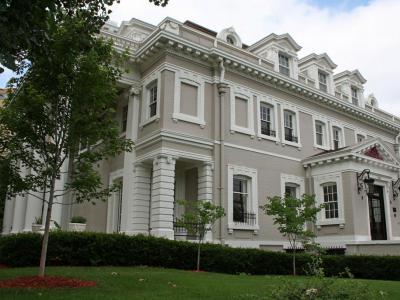 The Crawford Hill Mansion once played a central role in the social life of Denver's high society. During its heydays, the house was considered as Denver's "social capitol" where the city elites schmoozed and partied.

The mansion was built in 1906 for Crawford and Louise Hill. Crawford Hill was a prominent newspaper magnate who inherited the "Denver Republican" upon the death of his father. He was also the second vice president of the Associated Press, director of the Colorado Museum of Natural History and president of a number of land companies and smelting firms.

Louise Hill came from a Memphis aristocratic family, so she was familiar with all the high society rules. She established herself as the leader of Denver's social life and was famous for creating the "Sacred 36", which is a group of individuals considered acceptable to the inner circles of New York and Newport, Rhode Island high society.

Each spring Louise Hill signaled the beginning of Denver’s social season by unveiling a life-size statue of a nude woman holding a bouquet of flowers in her garden. Louise Hill also wrote Denver's first social register.

The three-story mansion is in a French Renaissance Revival style and went through an extensive restoration in 1990s. It is registered as a historical landmark.

Although not available for touring, as today the former mansion serves as a law office, one can still admire its grandness from the outside and imagine the city elites coming and leaving the lavish parties that this place was famous for.
Image Courtesy of Wikimedia and Jeffrey Beall.