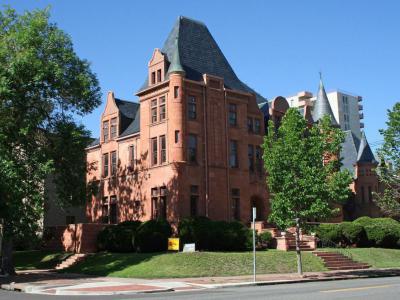 The mansion was built in 1891 by Colorado state senator Thomas Croke. Shortly thereafter, Croke sold the mansion to congressman Thomas Patterson. It was then lived in by Patterson's daughter, Margaret, and her husband, Richard Campbell.

The sandstone mansion encompasses four floors and 15,000 square feet. It was added to the National Register of Historic Places in 1973. In 2011, a renovation project began in the house that unearthed a number of artifacts from the mansion's early days. Items such as old newspapers, clothing and eyeglasses were discovered within the walls.

Believers in ghost stories know the Croke-Patterson-Campbell Mansion well. It is considered among the "most haunted" places in Colorado. People have reportedly seen ghostly apparitions, heard strange noises and experienced inexplicable changes in temperature.
Image Courtesy of Wikimedia and Jeffrey Beall.