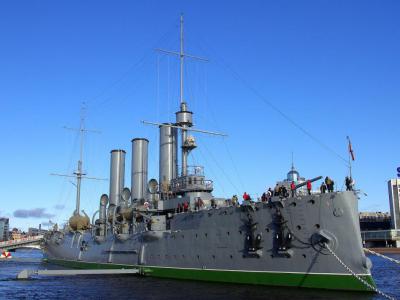 Aurora is a Russian protected cruiser, currently preserved as a museum ship in Saint Petersburg. At the time of her construction (1897-1900), Aurora was one of the biggest ships in the world – 416 feet long, 55 feet wide, and weighing 7,600 tons.

At the end of 1916, the cruiser was moved to Petrograd (the renamed Saint Petersburg) for a major repair. The city was brimming with revolutionary ferment and part of her crew joined the 1917 February Revolution. Most of them later also joined the Bolsheviks, who were preparing for a Communist revolution. At 9:40pm on 24 October 1917 a blank shot from Aurora's forecastle gun signaled the start of the assault on the Winter Palace, which was to be the beginning of the October Revolution.

For her revolutionary merits, Aurora was awarded the Order of the Red Banner On 2 November 1927.

Following extensive repairs from 1945 to 1947, the ship was permanently anchored on the Neva in Leningrad (now St. Petersburg) as a monument to the Great October Socialist Revolution. In 1957 Aurora became a museum-ship. On 22 February 1968 she was awarded the Order of the October Revolution, coincidentally featuring her own image thereon.

Ever since opening in 1957, 28 million people have visited the museum-ship.

Why You Should Visit:
A true symbol of the October Socialist Revolution and a prominent attribute of Russian history. The museum features over 500 documents, photographs, and objects that illustrate the ship’s glorious past.

Notes:
Not a lot of information in English, but there are enough interesting artifacts to help understand the most important historical facts. Tours of the underwater cruiser machine boiler are also available.

Hours:
Tue-Thu, Sat-Sun: 10:30am-4pm
The museum is closed the last Wednesday of each month
Image Courtesy of Flickr and Andrey Korchagin.
Sight description based on Wikipedia.