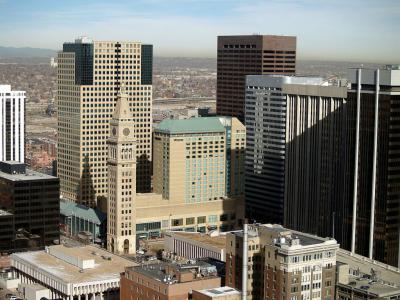 The tower was originally part of the Daniels & Fisher department store. It was designed by architect Frederick Sterner and modeled after St. Mark's Bell Tower, or Campanile, in Venice. Construction was completed in 1910. It was added to the National Register of Historic Places in 1969.

It is conveniently located across from the Money Museum at the Federal Reserve on the 16th Street Mall. Tourists can stare in wonder at the building from the outside or they can take the time to explore the inner-workings. Guided tours take visitors to the bell tower and the 20th floor observation deck. The Daniels & Fisher Tower deck offers stunning views of the city and the Rocky Mountains.
Image Courtesy of Wikimedia and David Shankbone.