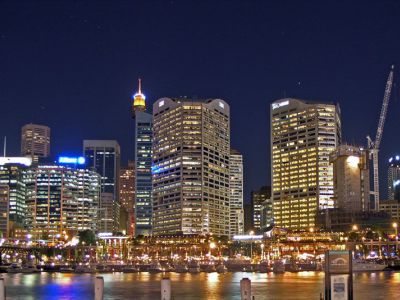 The Darling Harbour is a recreational area of Sydney with many interesting tourist attractions. It is also the place where visitors take hop on and off cruises around the harbour.

Named after Lieutenant General Ralph Darling, a former Governor General of New South Wales, it was once a thriving wharf and railway goods yard. Later the location was declared unfit for its original purpose and in the mid-1980s, it was decided to make it into a recreation facility. It was opened in 1988 by Queen Elizabeth II as part of the city’s bicentennial celebrations. Darling Harbour runs from Chinatown, on both sides of Cockle Bay to Kings Street Wharf and Pyrmont.

Why You Should Visit:
A fun, buzzing, unique place that is fast becoming the heart of Sydney – when you see the food outlets and amazing shopping you'll understand why.
Morning, noon or night, there's so much going on and you could sit here for hours taking it all in.

Tip:
Try heading down to the harbour between 4-7pm, as pretty much every restaurant/bar will have a Happy Hour going with drink & food prices slashed down.
Take a ferry from Darling Harbour into Sydney – you get to see wonderful views of Sydney Harbour Bridge and the Sydney Opera House from the water!
Image by SeanMack on Wikimedia under Creative Commons License.

Sydney is a melting pot, and the local food culture is a sure testament to that. The inflow of immigrants from Europe and Asia over the years has turned the city into a much coveted foodie destination. If you have adventurous palate and are keen to eat the best local food, follow this self-guided walk to check out some of the best eating places around The Rocks and Barangaroo areas of Sydney!

The Rocks is a historic area and the oldest neighborhood in downtown Sydney, located on the southern shore of Sydney Harbor, immediately north-west of the city's business district. It was the site of the first European colony in New South Wales when ships laden with convicts arrived from England. The original buildings here were made of sandstone which gave the area its name.

One of the main cities in Australia, Sydney is also the country's oldest metropolis. It has no shortage of impressive historical buildings, some dating back as far as the early 19th century. Many of the local landmarks, such as Sydney Town Hall, Queen Victoria Building (QVB), Hyde Park Barracks and others, are wonders in their own right and fit to delight any history buff. If you wish to...  view more