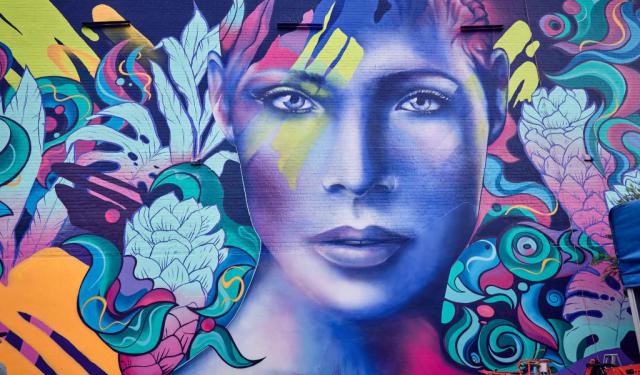 Whenever you think of street art in Sydney, one suburb immediately springs to mind, and that is Newtown. Largely regarded as Sydney’s coolest neighborhood, this is ground zero of the city's mural art scene. Since the early 1990s, with the appearance of the famous “I Have a Dream” mural on King Street, the area has been attracting artists with a message, adding a colorful coat of paint to its walls.

Alongside the murals and paintings located round and about, there are many great bars and restaurants, including Young Henry's brewery. Shopping for vintage clothing is another popular activity here, and you will find plenty of shops that can accommodate this habit.

If you want to get away from the steel skyscrapers and explore a quaint and funky suburb with some of Sydney’s most prominent murals, take this self-guided Newtown Street Art walk!
Image Courtesy of Flickr and JAM Project.
How it works: Download the app "GPSmyCity: Walks in 1K+ Cities" from iTunes App Store or Google Play to your mobile phone or tablet. The app turns your mobile device into a personal tour guide and its built-in GPS navigation functions guide you from one tour stop to next. The app works offline, so no data plan is needed when traveling abroad.

Perhaps the most photographed piece of urban street art in Australia, the “I Have a Dream” mural commemorates American civil rights leader Dr. Martin Luther King Jr. This is one of the largest and the longest-surviving murals in the Newtown area. Described as a "humanist protest against the sterility of postmodern art", it was created over weekend in August 1991 by a team led by New Zealand-born Canadian artist Andrew Aiken and his colleague Juilee Pryor.

Aiken and Pryor painted their work illegally, without Council permission – although they asked for it twice, but were refused. So they decided to do it anyway and concealed their work by hiding in plain view. Starting at 7pm on Friday, they worked through the night and resumed it the following evening. For this job, they used a cherry picker borrowed from a friend and a thousand dollars worth of paint.

The produced mural features a large portrait of Dr. King along with the Gothic lettering of his famous words from the speech made in 1963. Beneath it, in smaller letters, is the quotation from Genesis 37:19: "Behold the dreamer cometh; Come now therefore and let us slay him, and we shall see what will become of his dreams".

While the upper section of the design remains largely unchanged from the original, the lower part of it has endured numerous changes. At some point, the Aboriginal Flag was added at the bottom of the artwork. A portion of the left-hand-side was damaged by fire in 2011, but was soon restored.

The iconic mural is now a heritage-listed landmark following a historic decision made by the Marrickville Council to preserve it. It has been featured in a TV documentary and a music video of “A Sky Full of Stars” by UK band Coldplay.


Image Courtesy of Wikimedia and MediaServicesAP.
Sight description based on Wikipedia.
2

The "Africa" mural is a large painting that covers the entire side wall of an African restaurant in King Street, situated between the Newtown Mission and the Commonwealth Bank. It has been in place since the early 1990s. The original version of the mural featured reproduction of an old map printed by the Australian firm Chas. Scally & Co., most likely around the 1960s. The updated version, painted over the original in the early 2000s, reflects the key changes occurred in the African political geography over the past decades.
Image Courtesy of Wikimedia and MediaServicesAP.
Sight description based on Wikipedia.
3

The vibrant Live Outside mural in Wilson Street car park is the collaborative artwork by Shannon Crees, George Rose and Ruskidd. It was painted in 2017 for Jansport's Live Outside promotion organised by Teak SF, a branding group from San Francisco, through the local Authority Creative.
Image Courtesy of Flickr and JAM Project.
4

Painted on the side of a house on the corner of Mary Street and Lennox Street, the "Hide and Seek" mural is a relatively new work. It was created by West Australian visual artist Kyle Hughes-Odgers as part of the local Perfect Match program.

Known for his great illustrations for children’s books, the artist aims at presenting the ideas of nature and life in a colourful and rather playful way. A game of hide and seek – captured in this particular mural – featuring a giant playing with three small kids, who cunningly hide in his pocket, is yet another good example of his style.
Image Courtesy of Flickr and quillshadow.
5

In a close proximity to Newtown’s hustle and bustle lies a tranquil green space, known as Camperdown Memorial Park. The park incorporates a nearly 200-year-old St Stephens Cemetery, the walls and stone fence of which have long become an outdoor gallery for street artists.

The Wyrd Sisters mural sprawls across the entire back boundary wall of an adjacent residential property along Australia Street. It was painted in 2017 by Sydney-based graffiti artist Steven Nuttall, also known as Ox King.

The mural features three blue-skinned women, presumably inspired by witches from Shakespeare’s Macbeth, and reflects the weird characters, animals and plants seen around the park. Others, however, believe that its inspiration came from the characters of an eponymous book by Terry Pratchett. As for the artist himself, he says of his work that “It is an almost pagan ritual scene of these powerful women, the witches, protecting nature.”
Image Courtesy of Flickr and JAM Project.
6

Found on the corner of Denison Street and Lennox Street in Newtown is yet another prominent mural that adds a great deal of colour to the neighbourhood's scape. It was painted in 2015 by an artist who calls himself As One. In his own words, the depiction is “My version of the Emperor’s daughter, Irulan, from the Dune novels, getting loaded on spice gas as the Harkonnen’s invade.”
Image Courtesy of Flickr and Jules Antonio.
7

The Housing Bubble mural on Enmore Rd is the work of Fintan Magee, a 32-year-old street artist from Brisbane who now lives in Newtown. Dubbed the “Australian Bansky”, Fintan dominates the local street art scene. He has painted many large-scale photorealistic murals not just in Sydney but also around the globe, from Helsinki to Buenos Aires and everywhere in between.

This is one of his most recognisable masterpieces. Its symbolism is fairly straightforward: a pointed critique of Sydney’s property affordability crisis and the rapid gentrification of the once-working class inner west which sees the locals pushed out of their neighbourhood by property developers and high rental costs.

The huge mural depicts a man on all fours struggling under the weight of a woman sitting on his back. She is trying to catch a little terrace house, floating away on a set of balloons. Its placement is particularly ironic: splayed across the frontage of the modern Urban Hotel. The piece was part of a 2015 program by Marrickville Council called ‘Perfect Match’, which linked street artists with local businesses who could provide spaces for their murals.
Image Courtesy of Flickr and Jules Antonio.