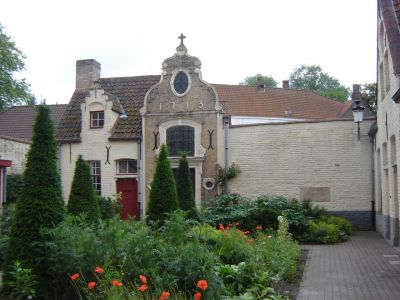 The De Vos Almshouse consists of a group of houses for the poor, widows and the elderly. It is one of the 46 almshouses, or Godshuizen, in the center of Bruges.

The De Vos Almshouse was founded by Adriane de Vos, a wealthy and philanthropic merchant of Bruges. It was founded in 1480 and built, at the time, near the city wall and the Beguinage. Each house was assigned by a specific organization, like a hospital or a guild, e.g. the cooper’s or mason’s guild, with a view to benefit their elderly or poor members.

The De Vos Almshouse consisted of a complex of eight houses with an inner courtyard. The residents pumped water from a well in the courtyard and grew vegetables in small gardens in front of their houses. Like all almshouses in Bruges, the De Vos Godshuizen has a chapel where the residents were expected to pray for the soul of their benefactor. The houses have a white façade with the name of Adriane de Vos painted on it. The windows do not face the street because a tax was levied for each street facing window.

Today, the city owns the almshouse and has converted the complex into six houses for the residence of elderly citizens. It is managed by the social service department of the government. Visitors are not admitted inside but the quaint complex can be seen over a low wall.
Image Courtesy of Wikimedia and LimoWreck.