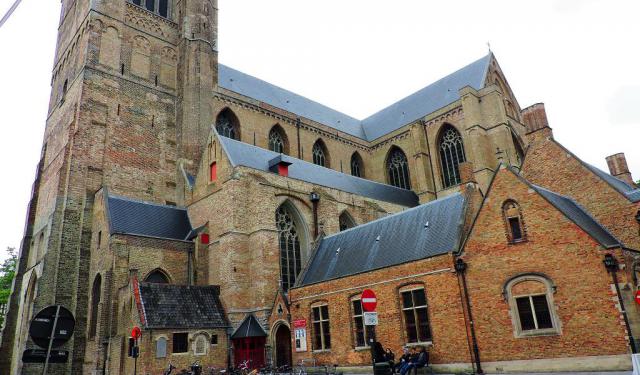 It is not a big secret that some of the most beautiful churches in the world are located in the medieval city of Brugge. Built in the Gothic and Baroque architectural styles, the churches are among the most popular sites in the city. Take this tour to discover for yourself the religious jewels of Brugge.
Image Courtesy of Flickr and Dimitris Kamaras.
How it works: Download the app "GPSmyCity: Walks in 1K+ Cities" from iTunes App Store or Google Play to your mobile phone or tablet. The app turns your mobile device into a personal tour guide and its built-in GPS navigation functions guide you from one tour stop to next. The app works offline, so no data plan is needed when traveling abroad.

The Beguinage dates back to 1245. The Beguinage was a community of women who devoted themselves to poverty, simplicity and preaching. They operated under lay orders and not binding vows. Women working in the Beguinage could leave the community at any time.

Most of the buildings are newer and date to the 19th century. The last beguinage woman left in 1927. Since then, the area has housed a community of Benedictine nuns.

Visitors can enter the Beguinage over a bridge and continue through a 1776 gatehouse. A church has been on this site since 1245. However, the first church burned and was replaced in 1605. The church is dedicated to St. Elisabeth of Hungary and received a Baroque update in the early 1700s.

The altar is dedicated to St. Joseph. The chapel's most revered treasure is a gilded Madonna and child that dates to 1240.

A small museum on the ground depicts the living quarters of beguine. The Benedictine Sisters appreciate silence as they go about their work. The expansive lawn features beautiful poplars and is a wonderful place to appreciate the silence and reverent dedication of the sisters.

The Church of Our Lady is a stunning example of Gothic architecture. The church dates back to the 13th century. The tower is 115.6 meters (379 feet) tall and is the tallest structure in Brugge. The impressive tower is the third tallest brickwork tower in the world.

The exterior flying buttresses were built in the 13th century. The interior side aisles and chancel feature ornate Baroque style.

Several notable tombs are located behind the altar. Charles the Bold and his daughter Duchess Mary are interred here. The tombs feature gilded bronze effigies. Charles the Bold wears full armor. Both Charles and Mary are shown wearing crowns. Mary Lovel, the founder of a convent at Antwerp, is also buried here.

The sculpture is notable on two fronts. First, it is the only Michelangelo artwork that left Italy during his lifetime. Second, instead of featuring a Modonna looking lovingly at her child, this interpretation shows Madonna's sorrow at what will happen to her son.

French revolutionaries looted the sculpture in 1794 as did the German Nazis in 1944. It was successfully recovered both times. Near the sculpture, there are other tombs of important Brugeans. In addition, the Last Supper and Adoration of the Shepards by Pieter Poubus and the Transfigeration by Gerard David are outstanding.

Why You Should Visit:
To admire the huge brick tower, multiple altars, multiple organs, and some great artwork! The combination of this church and the Bonifacius bridge, plus the gardens and the canals is absolutely fabulous.

St. Salvator's Cathedral has gone through several changes and renovations during its history. The latest renovation occurred in the 1800s after a fire damaged the cathedral. During this renovation, architect Robert Chantrell added a Romanesque tower. This imposing tower is 99 meters (324 feet) tall.

Most of the cathedral is designed in the Gothic style of the 14th century. The Gothic choir stalls from 1430 are impressive and noteworthy. Visitors can also admire the many beautiful stained glass artworks.

St. Salvator is home to many other works of art, including artworks that were originally stored in St. Donatian's. Visitors can admire an extensive collection from renowned 14th-18th century Flemish artists like Hugo van der Goes and Dieric Bouts.

The unique wall carpets were manufactured by Jasper van der Borcht in 1731. The cathedral also displays the paintings that were used as inspiration for the wall carpets' designs.

Jacobus Van Eynde built the fabulous organ in 1719. Visitors can hear it played during services or concerts.

4) Basilica of the Holy Blood (must see)

Built between 1134 and 1157, the Basilica of the Holy Blood is a Roman Catholic basilica located in the heart of Brugge. Known as a place of pilgrimage, it houses a venerated relic of the Holy Blood (basically, a piece of cloth used by Joseph of Arimathea to wipe the blood of Christ after the Crucifixion) brought from the Holy Land by Thierry of Alsace, Count of Flanders. The cloth with the bloodstain was preserved and brought here after the sacking of Byzantine by the crusader army. The church was declared a minor basilica in 1923.

The basilica in Burg square consists of a lower and upper chapel. The lower chapel, dedicated to St. Basil the Great, is a dark Romanesque structure that remains virtually unchanged. The venerated relic is in the upper chapel, which was rebuilt in the Gothic style in the 16th century and renovated in the 19th century in Gothic Revival style.

Tip:
If you visit, the museum is the first thing you'll come to (and there is a small charge); however, the relic is not in there – it is, in fact, on show in the main church, which is free to view. It is also worth checking the official website for special event related to the Holy Blood - the page is well-constructed with 5 languages (English, French, Dutch, Spanish, and German).

The original St. Anne's Church was an aisled church, which was later transformed into a three-aisled prayer house. In 1580 it was sold and demolished. In 1611 a new church was raised on the old ruins. The church’s interior is mostly notable for its Baroque architecture. One can also learn about the baptism of the well-known Flemish poet Guido Gezelle, which occurred here in 1830.
Image Courtesy of Flickr and Jim Linwood.
6

Built by a rich merchant to the design of the Church of the Holy Sepulcher in Jerusalem, this chapel remains a privately owned place of worship maintained by his descendants.

The Jerusalem Chapel was constructed in 1428 by Anselmus Adornes and his spouse, Margaretha vander Banck. Anselmus Adornes belonged to the wealthy Adorni family of merchants who came from Genoa and settled in Brugge. The ornate mausoleums of the founders created by Cornelis Thieleman are located in the middle of the church. The original structure of the church has remained intact from the 15th century unlike many other churches in Europe.

The chapel has a simple façade with a pointed arch above the entrance. The unique part of the structure is the octagonal tower flanked by four polygonal turrets above the choir. A wooden globe is placed on top of the tower symbolizing the world. There is an upper choir above a small nave. Under this choir is a crypt where an imitation of the grave of Christ is located. Sculptures relating to the holy grave symbolized by skulls and ladders are also found in the altar and the nave. The stained glass windows light up the interiors with a beautifully colored glow.

Why You Should Visit:
The site is unique, very quiet, surprising and intimate, but the chapel itself is well worth the price of admission – enchanting and a little creepy at the same time.
There's also an attached self-service small cafe and book/gift shop, plus a small garden and a lounge area, a bit old fashioned, but clean restrooms are available.

Tip:
While you're in the area, make time to stop by the Kantcentrum, where you get to watch bobbin lace-making demonstrations – truly magnificent.

In the 17th century, Brugge became a home for the banished nuns of England. Later, in the early 18th century, the English Convent was built. The Convent boasts an exquisite interior – from the lavishly decorated ceiling to the stained glass windows and marble altar which is a rare piece of art. It is known to be the place of death of the famous poet-priest Guido Gezelle, and it is the only domed church located in the medieval part of the city. Visiting the convent is a worthwhile experience for anyone interested in churches.

Tip:
Keep in mind, this is a convent and not necessarily a tourist destination. While they do accept visitors, access and times are very limited. If open for visiting, ring the bell and go inside. Be quiet and respectful, please. As always when visiting a church as a tourist, leave a donation in the box on your way out – especially if you are taking photos.
Image Courtesy of Wikimedia and VWAmFot.