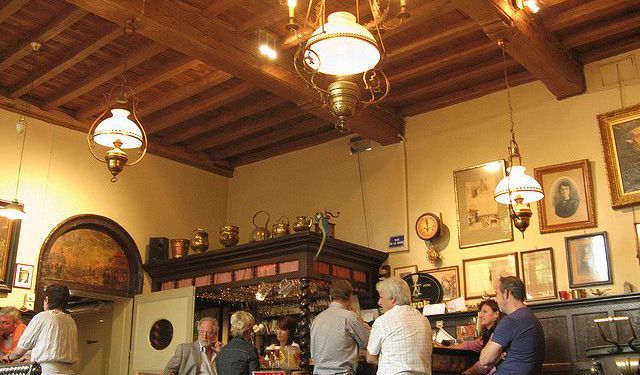 Image by Flickr.Whisker on Flickr under Creative Commons License.

The Land of Beer that is Belgium, where each corner calls to you alluringly, has long welcomed thirsty visitors from all over the world. Of all the Belgian destinations, the medieval city of Brugge is a perfect place to promote one of the country’s most important and best-known exports. Back in the 15th century, at the peak of its commercial might, the city boasted over 50 working breweries within its fortified walls.

Today there are only a handful of them left, including staples like Bourgogne des Flandres – renowned for its distinct red-brown brew of low alcohol content and rich finish, and De Halve Maan – famed as the owner of the world's first ever beer pipeline. Each of these two has a small shop and is well equipped to let you taste their beers along with some specially prepared side dishes.

Also, you will be amazed to find in Brugge more than one bar that can offer you up to 400(!!!) beers, both on tap and in bottles. Among the well-stocked champions here are Staminee de Garre, Cambrinus Bierbrasserie and 't Brugs Beertje Beer House. Be sure to drop by any of these and you will never regret that you did.

True, Brugge and Belgian beer go together hand in hand, and no visit to the city is complete without having sampled a good few liters of the local brews. If you’re a lover of beer but not sure where to drink it when in Brugge for the first time, don’t miss the opportunity and rely on our thoroughly selected self-guided tour. It'll walk you through to the major HOPspots in this charming city for a wonderful time enhanced with a few pints of exclusive domestic booze.
How it works: Download the app "GPSmyCity: Walks in 1K+ Cities" from iTunes App Store or Google Play to your mobile phone or tablet. The app turns your mobile device into a personal tour guide and its built-in GPS navigation functions guide you from one tour stop to next. The app works offline, so no data plan is needed when traveling abroad.

The Brugs Biermuseum is a visitor center located on the upper floors of the Post Office building on the corner of the Grote Markt and Breidelstraat in Bruges. The museum focuses on the history of beer from the past to the present, beer in Bruges, the Trappists, types of beer in general and brewing processes. It should not be confused with the Brewery Museum on Walplein.

Using a tablet computer , visitors (in 10 languages) can follow the history of beer from the Mesopotamians , with a special focus on the Bruges brewery history. There is an adapted trail for children. After the visit, beer can be tasted in a tasting room. A library of books on beer is planned.

Image by Olavfin on Wikimedia under Creative Commons License.
Sight description based on wikipedia
2

Perhaps one of the coziest and best known bars in Brugge, Staminee de Garre is well hidden in a narrow alley. In fact so narrow that if you are a big person, chances are that you may have to struggle a bit to fit down this alley to get in. Also, do keep your eyes really wide open so as not to miss the entrance.

But rest assured that the effort is all well worth it!

This wonderful three-story bar is the only place in town where you can buy their own, locally brewed De Garre Tripel. This monster of a beer – at 13%, with a truly iconic glass which they also sell – is the real draw of the house! In addition to it, there is an extensive range of Belgium's other finest beers, probably about 150 bottle offerings(!!!), organized by style. Usually, each beer order comes with a free snack of cheese. Just find yourself a quiet little table and savour it.

This watering hole is quite tiny, about 300 square feet per floor – enough to accommodate about 20 or so visitors. But the size makes it all intimate and the vibe is friendly with a good mix of patrons and languages. In this bar you can hear the authentic Brugge dialect spoken whilst enjoying the company of amiable locals.

The interior is very traditional and rustic, with lots of wood and stone – old but warm. Another – cool – thing about this establishment is that you can look down from the second floor to the ground floor and enjoy a great view.


Image by Gordito1869 on Wikimedia under Creative Commons License.
3

The legendary personality of Cambrinus, also labeled as John I Primus, Duke of Brabant, is often mentioned in the songs of students as the King of Beer, and is viewed by many as the inventor of this beverage. Attesting to his status, the eponymous bar in Brugge carries image of Cambrinus, depicted as a statue sat upon a large beer keg, with a foaming mug in his hand, on the corner of the façade, and the portrait thereof with a lady etched into a glass window.

The bar itself is housed in a historic building dated 1699, which makes it all the more must-go destination for any beer lover. Calling the beer menu of this brasserie “extensive” is a huge understatement, as it's literally enough to make anyone lose their bearings for a moment... The selection of Belgian beers on offer is absolutely phenomenal – a total of more than 400 different kinds on hand, including a nice Christmas menu in season!

In particular, at Cambrinus they have Westvleteren, a beer that is hard to find anywhere else, for it is not brewed for commercial use and is produced only in small quantities. Otherwise, you can spend ages simply flicking through their beer references or simply close your eyes, open the menu and point randomly! You won't go wrong.

In addition to this ridiculously long list of beers “imprisoned” here and waiting to be released, there's a sort of upscale pub food à la carte – a very Belgian brewery menu with a few dishes made with beer, all at really affordable prices.

The atmosphere is brilliant, especially in the winter months, warm with a slight smell of hops. Ideal for a stop for a good franquette.
Image by Bernt Rostad on Flickr under Creative Commons License.
4

The Bourgogne des Flandres Pure does not have added yeast; instead, the alcohol content is created by spontaneous fermentation. After the beer is brewed, the wort cools down in an open-air basin. Wild yeasts in the air then mix with the wort, which ferments spontaneously.

Visitors can find out about the brewing process and learn more about hops. In addition, visitors can learn how beer is tapped and can even test their skills using a digital video interface. You can also have a custom bottle created featuring your picture.

Kids are welcome to join the tour. While they won't be sampling the beer, they'll love seeing the brewery process.

The Bourgogne des Flandres Brewery features gorgeous views of the Brugge canals below.
Image by CHRISVANSASSENBROECK on Wikimedia under Creative Commons License.
5

With just about every known Belgian beer presented at ‘t Brugs Beertje, there is always a wide cross section of visitors rubbing shoulders at this brasserie.

First opened in 1983, in a building dating from 1632, this is one of the best beer cafés in the country, specialized in Belgian beers of "high appetite". It started off with just about 120 beers on the menu, but today has at least 300 brews available, including five on tap (“van ‘t vat” in Flemish).

Pleasant and atmospheric, 't Brugs Beertje is more than just a café but rather a worthy tasting room where the real beer spirit is enjoyed and beerological enthusiasm is conveyed among the many national and international guests under one roof.

The name of the place translates as “Bruges’s Little Bear” and refers to a legend of a large "white" bear that, in the Middle Ages, made the surroundings of Brugge unsafe and had to be killed by Boudewijn I (founder of the County of Flanders). Since then, the bear has been the city symbol, and a statue of an upright bear with a shield adorns the establishment's façade.

The interior, decorated with all kinds of beer articles, evokes old-time memories and exudes a very cozy brown pub atmosphere, conducive to a good conversation. There is also a small shop where you can buy all kinds of beer souvenirs (T-shirts, posters, etc.) and some Brugge beer guides. A plush bear and a comic strip about the history of the one and only Brugse Beer are also included.

Food is available and includes a cheese board with five types of cheeses, plus a number of pâtés. The service is always friendly and helpful, ready to offer suggestions for anyone who may need help with their beer choice.
Image by Russell Trow on Flickr under Creative Commons License.
6

The De Halve Maan or Half Moon brewery was started in the year 1564. At the time it was called Die Maene or The Moon. It was purchased by Leon Maes in 1856. The brewery still belongs to his descendants. Over the years, the family has adopted innovative and advanced methods of brewing to ensure that the finest products are sold to customers. Today, a daily tour is conducted showing visitors the brewing process, beer making utensils. The tour concludes with a beer tasting session.

Only a portion of the beer making process takes place at the De Halve Maan Brewery today. The building is used as a part brewery and part museum. Visitors can purchase tickets at the restaurant attached to the museum and join the 45 minute tour around the building.

Guides explain the process of beer making and there are many interesting exhibits like barrels, tools and machines used by the brewery in the past. The tour ends at the roof of the building that commands spectacular views across Bruges. A full glass of Bruges Zot beer, a specialty product of the brewery, is offered to the tour participants at the end of the tour.