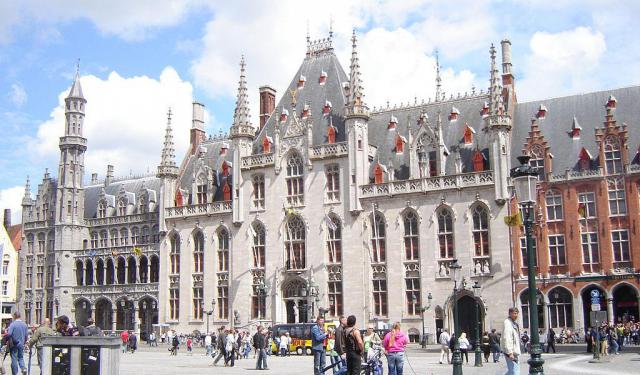 Image by User:LimoWreck on Wikimedia under Creative Commons License.

The Historic Town of Brugge hides stunning architectural monuments within its egg-shaped boundary. It is the home of both modern and medieval masterpieces, and each corner of the town has something that will create a deep and lasting impression. Take this tour and start looking for the exciting architectural treasures of Brugge.
How it works: Download the app "GPSmyCity: Walks in 1K+ Cities" from iTunes App Store or Google Play to your mobile phone or tablet. The app turns your mobile device into a personal tour guide and its built-in GPS navigation functions guide you from one tour stop to next. The app works offline, so no data plan is needed when traveling abroad.

The contemporary Bargebrug (Barge Bridge) connects Minnewater Park and Barge Square. The bridge is really eye catching - it is bright red and is asymmetrical in form. Its color is in sharp contrast to the surrounding green parkland. The bridge can be seen as a city entrance, and Barge Square is a popular meeting place for tourists.
Image by CEphoto, Uwe Aranas on Wikimedia under Creative Commons License.
2

The De Vos Almshouse consists of a group of houses for the poor, widows and the elderly. It is one of the 46 almshouses, or Godshuizen, in the center of Bruges.

The De Vos Almshouse was founded by Adriane de Vos, a wealthy and philanthropic merchant of Bruges. It was founded in 1480 and built, at the time, near the city wall and the Beguinage. Each house was assigned by a specific organization, like a hospital or a guild, e.g. the cooper’s or mason’s guild, with a view to benefit their elderly or poor members.

The De Vos Almshouse consisted of a complex of eight houses with an inner courtyard. The residents pumped water from a well in the courtyard and grew vegetables in small gardens in front of their houses. Like all almshouses in Bruges, the De Vos Godshuizen has a chapel where the residents were expected to pray for the soul of their benefactor. The houses have a white façade with the name of Adriane de Vos painted on it. The windows do not face the street because a tax was levied for each street facing window.

Today, the city owns the almshouse and has converted the complex into six houses for the residence of elderly citizens. It is managed by the social service department of the government. Visitors are not admitted inside but the quaint complex can be seen over a low wall.

Image by LimoWreck on Wikimedia under Creative Commons License.
3

The Church of Our Lady is a stunning example of Gothic architecture. The church dates back to the 13th century. The tower is 115.6 meters (379 feet) tall and is the tallest structure in Brugge. The impressive tower is the third tallest brickwork tower in the world.

The exterior flying buttresses were built in the 13th century. The interior side aisles and chancel feature ornate Baroque style.

Several notable tombs are located behind the altar. Charles the Bold and his daughter Duchess Mary are interred here. The tombs feature gilded bronze effigies. Charles the Bold wears full armor. Both Charles and Mary are shown wearing crowns. Mary Lovel, the founder of a convent at Antwerp, is also buried here.

The sculpture is notable on two fronts. First, it is the only Michelangelo artwork that left Italy during his lifetime. Second, instead of featuring a Modonna looking lovingly at her child, this interpretation shows Madonna's sorrow at what will happen to her son.

French revolutionaries looted the sculpture in 1794 as did the German Nazis in 1944. It was successfully recovered both times. Near the sculpture, there are other tombs of important Brugeans. In addition, the Last Supper and Adoration of the Shepards by Pieter Poubus and the Transfigeration by Gerard David are outstanding.

Why You Should Visit:
To admire the huge brick tower, multiple altars, multiple organs, and some great artwork! The combination of this church and the Bonifacius bridge, plus the gardens and the canals is absolutely fabulous.

Brugge is the best preserved city in Flanders. One of the jewels of the Flemish capital is the Provost’s House. It is an amazing Baroque-style white structure built in 1666. Originally, it served as the bishop’s residence and continued so until 1794. It is located in Burg Square and is currently occupied by government offices.
Image by Kelly McCarthy on Flickr under Creative Commons License.
5

The city of Brugge boasts impressive medieval architecture mixed with some marvelous 19th-century buildings. The Provinciaal Hof (or Provincial Court) is one such lovely structure located in the Grôte Markt. It is quite imposing and it would be very difficult to not admire its Neogothic structure. The building houses the headquarters of the government of West Flanders and the Post Office, but sometimes they use it for exhibitions. Be sure to admire it and take some photos at the least.
Image by Marc Ryckaert on Wikimedia under Creative Commons License.
6

The Poortersloge or Burgher’s Lodge is a worthy representative of the Gothic architecture of Brugge. It was built at the end of the 14th century and served as a meeting place for the burghers. One can admire its wonderful façade, decorated with figures; one of these is of the legendary bear, Beertje van de Logie, dated to 1417. In the past, banquets and festivities were held here; nowadays, the building holds historic documents.
Image by LimoWreck on Wikimedia under Creative Commons License.
7

The Hof Bladelin is a large mansion in Bruges. It is now a convent and home for the elderly with a small museum inside.

The Hof Bladelin was built in 1451 as the house of Pieter Bladelin and his wife, Margaret of Vagewierre. He was the counselor and treasurer of Philip the Good, the Duke of Burgundy. At the time, he was one of the richest men in the area and laid the foundations of a town called Middleburg. The Hof Bladelin was constructed on reclaimed land, located in the northern part of the city. The couple did not have children and the property was inherited by Bladelin’s sister after their death. The Medici’s, a powerful Florentine banking family, bought the house in 1472. Today it accommodates a convent, managed by the order of Sisters of Our Lady of 7 Sorrows that runs an elder care facility in the building.

The Hof Bladelin has the architectural design of a Gothic castle. The Renaissance courtyard was designed in Italian style and added to the building by the Medici family. The stone medallion portraits of Lorenzo de Medici and his wife are still found in the courtyard. The ribbed vaulted ceiling in the interiors has some unique corbels. They are adorned with scenes depicting the duties of Bladelin and the life of St. Alphege of Canterbury.
Image by Zeisterre on Wikimedia under Creative Commons License.
8

The Ezelpoort, or Donkey’s Gate, is one of the four remaining medieval city gates of Bruges. Unlike the other gates that were built on the banks of the canal, it is completely surrounded by water.

The Ezelpoort was built with the second set of city walls in 1297. It was reconstructed based on the design of architects, Jan Slabbaerd and Mathias Saghen, authors of two other gates, called the Boeveriepoort and the Smedenpoort. It was also called the Ostendpoort because merchants and travelers used to pass through it on the road to Ostend. The gate has been renovated several times. The most recent restoration took place between 1991 and 1993, for which it was awarded the Europa Nostra Award in 1994.

The lower section of the brick gate is the only surviving part of the original structure. It was completely altered in the 17th century. The height of the original gate was lowered. A guard house was added in the early 18th century and the front gate was demolished in the late 18th century. The two round turrets have a simple façade unlike the other city gates. The administrative office of the Anima Eterna , the resident orchestra of the Concertgebouw is located in the main building and today only pedestrian and bicycle traffic is allowed through the gate.
Image by Marc Ryckaert on Wikimedia under Creative Commons License.