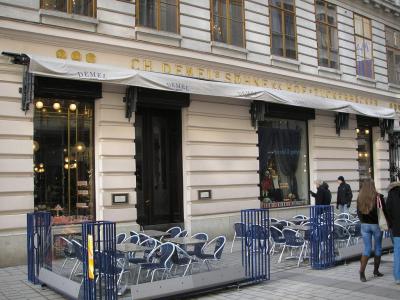 Demel is a famous pastry shop and chocolaterie in Vienna, established in 1786. The company bears the title of a Purveyor to the Imperial and Royal Court since 1874.

Demel was previously known as Hofzuckerbäckerei pastry shop, founded by Ludwig Dehne, a confectioner from Württemberg. Upon his early death in 1799, the business was continued by his widow for their minor son August Dehne. The latter inherited the company in 1832 and successfully managed the business, however, as his son pursued an academic career, he sold the company to his journeyman, Christoph Demel, in 1857.

Renamed Ch. Demel's Söhne in 1867, Christoph Demel's sons Joseph and Karl continued the business and were granted the title of a purveyor to the Habsburg court by Emperor Franz Joseph I in 1874. In the heyday of the Austro-Hungarian monarchy, notable customers of Demel included Empress Elisabeth (Sisi), Princess Pauline von Metternich, and actress Katharina Schratt. During the Austrian Anschluss to Nazi Germany in 1938–45, the Vienna Gauleiter Baldur von Schirach and his wife Henriette were also regulars here.

If you want to travel back to the imperial times and enjoy an authentic Austrian dessert, this is a great place to go.