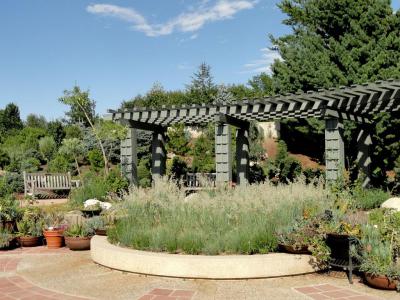 The Denver Botanic Gardens is a public botanical garden located in the Cheesman Park neighborhood. The 23-acre park contains a conservatory, a variety of theme gardens and a sunken amphitheater, which hosts various concerts in the summer. Woody Allen's 1973 movie Sleeper includes some scenes filmed at the gardens. The Japanese Garden at the Denver Botanic Garden is called Shofu-en - the Garden of Wind and Pines. It was designed by Koichi Kawana. The Denver Botanic Gardens, along with nearby Cheesman Park and Congress Park, sit atop what used to be Mount Prospect Cemetery. Although the majority of bodies were removed in 1893, the interred continued to be removed up until the 1950s. It is estimated that as many as 2,000 bodies may still be buried in the park. As recently as 2008, graves were uncovered during the construction of an underground parking structure.
Image by Laurascudder on Wikimedia under Creative Commons License.
Sight description based on wikipedia