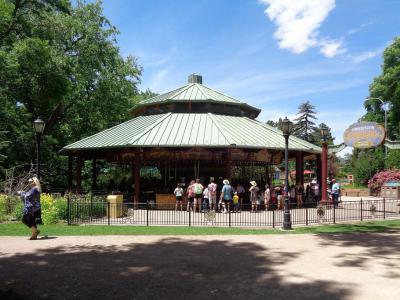 The Denver Zoo is an 80-acre facility located in City Park. Founded in 1896, it is owned by the City and County of Denver and funded in part by the Scientific and Cultural Facilities District (SCFD). It was the most popular paid attraction in the Denver metropolitan area in 2005. The Denver zoo was started with the donation of an orphaned American black bear. With the construction of Bear Mountain, it became the first zoo in the United States to use naturalistic zoo enclosures rather than cages with bars. It expanded on this concept with Primate Panorama with its huge mesh tents and open areas for apes and monkeys, and Predator Ridge, which has three separate areas through which animals are rotated so that their overlapping scents provide environmental enrichment. The latest Asian Tropics exhibit (now under construction) will be divided into five areas for rotating the various species.
Image by Ginkgo100 on Wikimedia under Creative Commons License.
Sight description based on wikipedia