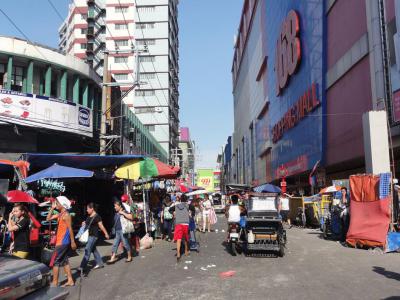 The Divisoria Market is one of the best places to shop in Manila. It is often called the “mother of all markets in Manila” with a reputation as “the Mecca of value shopping” for the variety of products and the low prices it offers.

Unlike other markets, the Divisoria Market sells almost everything from jewelry to footwear, souvenirs to school items, electronics to foods all at wholesale prices. The market is also very popular for textiles. This colossal and chaotic market is located in the heart of the city, surrounded by Juan Luna, Santo Cristo, Recto and Comercio street.

During the Spanish rule, the non-Christian Chinese merchants were not allowed to trade inside the walled city. The Divisoria market was initially a small community of Chinese merchants which then expanded and blossomed into a commercial center and a major trade center in the 1990s.

Today, the market has several malls like the 168 mall, Meisic mall, Tutuban Center mall (former Tutuban Central Station) and the Divisoria Mall. Along with all the stores and malls, the Market also has a food hub where one can enjoy a variety of cuisines including the local Filipino food and Chinese food. Although, the market is busy year around, it is especially crowded before Christmas and around the time when schools reopen.
Image Courtesy of Patrick Roque.