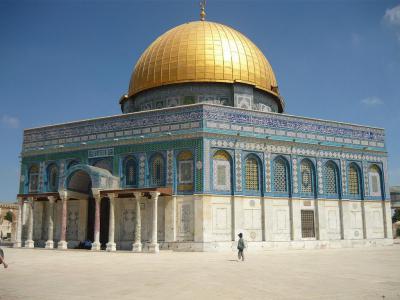 Dome of the Rock, Jerusalem

The Dome of the Rock is a Muslim shrine located at the top of the Temple Mount in Old Jerusalem, and was built in 691 CE by Umayyad Caliph Abd al-Malik. It is believed to be standing over a stone that is regarded sacred by many religions.

Muslims claim it was on this stone that Archangel Gabriel brought Muhammad to pray with Abraham, Jesus, and Moses, and where from Prophet Muhammad ascended to Heaven during the Night Journey to Jerusalem. A monument to that is the oldest preserved Mihrab in the Islamic world. Jews reckon it was on this rock that Abraham was ready to sacrifice his son, and both Christians and Muslims also believe that it was the site of Solomon’s Temple later destroyed. In fact, several subsequent churches built by the Knights Templar follow the same design as that of this shrine.

On the outside, the Dome of the Rock is covered in exquisite tile-work and white marble, while its inside features octagonal shape with an outside ring and inner circle. This is to represent the circular movement around Ka’ba in Mecca made by pilgrims who visit there. The sacred rock is protected by a wooden screen that replaces the wrought iron one erected by the Knights Templar. That screen is now kept in the Islamic Museum.

Over the course of the centuries, the temple has been refurbished several times with an extensive renovation to the tile-work (adhering to the original design much as possible), grand inside mosaics and dome renovation which saw the original gold replaced with aluminum covered in gold leaf (a gift from king Hussein of Jordan) making it a truly spectacular sight.

Tip:
There is a combined fee charged for the entry to the Dome of the Rock, the al-Aqsa Mosque, and the Islamic Museum. Opening hours vary and only Muslims are allowed to enter at certain times. Non-Muslims use a separate entrance.
If your clothing doesn't meet the dress code, you will be loaned a pair of pants to cover your legs or a scarf to cover your head.
Image Courtesy of Wikimedia and Carlosgrebolledo.