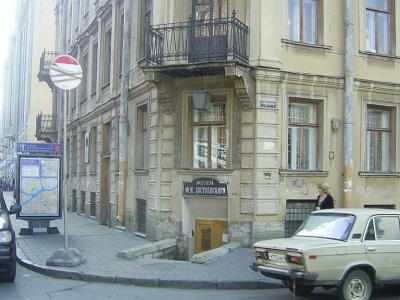 The Dostoevsky Literary Memorial Museum at 5/2 Kuznechny Lane is by far not the only St. Petersburg address of Fyodor Dostoevsky. Still, the ultimate choice of this location for the museum was made since it was here that the writer lived twice, including the last few years of his life – from October 5, 1878 until his death on January 28, 1881 – and wrote his last novel "The Brothers Karamazov".

From the basement, a spiral staircase leads all the way up to the museum which opened its doors on November 11, 1971, marking the 150th anniversary of the writer. The permanent exposition comprises two parts: Dostoevsky's memorial apartment and a literary exposition.

The memorial apartment consists of seven rooms: Dostoevsky's office, living room, dining room, Anna Grigorievna's (Dostoevsky's wife) room, nursery, washroom and hallway. The furnishings have been recreated with the help of archival plans and memoirs of contemporaries. Andrei Fyodorovich Dostoevsky, the grandson of the writer, made a significant contribution to the museum, while Maria Savostyanova, Dostoevsky's grandniece, also donated some of the items.

The literary exposition is set in the halls opposite the memorial apartment. The division of the exposition into two parts is reflected in the name of the museum - “Literary Memorial”. The fundamental difference between the two parts is that the memorial apartment as a whole remains unchanged, while the literary exposition is subject to periodical changes. There is also a small theater attached to the museum to host conferences and poetry readings.

Why You Should Visit:
The price is fair, the staff are polite, the rooms are lovingly recreated and the information provided by the audio guide is super comprehensive and very engaging.

Tip:
If you visit, check out the farmers market on the same side of the street, between the museum and the metro station. It's fun to shop as the locals do!

Opening Hours:
Tue - Sat: 11am-6pm; Wed: 1–8pm; closed on Monday and the last Wednesday of each month
Image Courtesy of Wikimedia and S. Barichev.
Sight description based on Wikipedia.