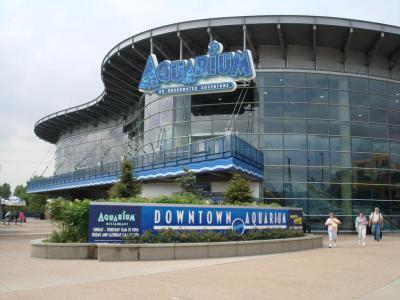 The Downtown Aquarium (formerly Colorado's Ocean Journey) is a public aquarium and restaurant located at the intersection of I-25 and 23rd Ave. The 107,000 square foot (9940 m²) main building sits on a 17-acre (69,000 m²) piece of land adjacent to the South Platte River. Its freshwater and marine aquaria total approximately 1,200,000 gallons (4,500,000 liters) and exhibit a variety of fish and other animals. It is the largest aquarium between Chicago and California. A major theme for this landlocked aquarium is the relationship between inland freshwater ecosystems and the ocean. The original design of the aquarium was zoogeographic. It focused on the path to the ocean taken by two rivers, the Colorado River in North America and the Kampar River in Indonesia. The Colorado River Journey included exhibits of endangered fish, including Desert Pupfish; gamefish such as bass; and northern river otters, among other species.
Image by Stilfehler on Wikimedia under Creative Commons License.
Sight description based on wikipedia