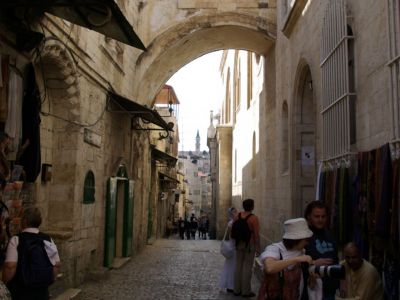 Thousands of pilgrims each year walk under the impressive stone arch spanning the narrow Via Dolorosa in the Muslim Quarter, near Station I and II, without realizing the extensive remains of first-century Jerusalem lying beneath their feet. For centuries many believed this arch was part of an ancient arch in the Antonia Fortress where, according to the New Testament (John 19-15), the Roman governor Pontius Pilate presented Jesus — beaten, crowned with thorns and clothed in a purple robe — to a hostile mob with the words: “Ecce Homo” (“Behold the man” or “This is the man” in Latin), prior to sentencing him to death.

This belief persists in many publications, although archaeologists prove that this arch was built after the times of Jesus. Some say it was originally a city gate from the Herod Agrippa I period (41-44 AD), while others reckon it is a remaining part of the monumental ramp built by the Romans in 70 AD during the Jewish Rebellion, whereas others claim it was part of the three-arch Roman victory gate that served entrance to a great public forum (plaza) constructed by emperor Hadrian during reconstruction of the city in 135 AD — a century after Jesus was crucified.

A big central arch seen in the street today used to have smaller arches on both sides. Eventually, the small northern arch was integrated into the adjacent Convent of the Sisters of Zion, built in 1857; one can enter the monastic church and view the northern arch free of charge. The Church of Ecce Homo, also known as the Basilica of Ecce Homo, is named for Pontius Pilate's Ecce Homo speech, which is likely to have taken place on the pavement below this church.
Image Courtesy of Wikimedia and Berthold Werner.