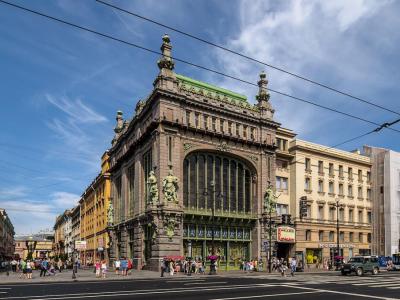 Elisseeff Emporium (aka Yeliseyevsky store) in St. Petersburg is one of the two retail complexes in Russia (the other one being in Moscow) opened by the merchant brothers Elisseeff at the turn of the 20th century. Renowned primarily for its landmark food hall, this is one of the most striking examples of St. Petersburg's Art Nouveau architecture, designed by Gabriel Baranovskii.

The architect made the entire building look like a giant stained glass shop window, which spans several floors and starkly contrasts the granite façade adorned with allegorical sculptures of Commerce, Industry, Science and Arts, created by Estonian sculptor Amandus Adamson.

Built in 1902–1903, the five-story edifice contained pretty much every feature befitting a premium choice for commerce: large retail halls and storage rooms, walk-in/drive-in coolers and refrigerator rooms, some of Europe's best wine cellars, not to mention a performance theater. The latter is still in place, albeit its lavish Art Nouveau interiors didn't survive a 1960s renovation.

In between 1917 and the 1990s, the shop was state-owned and, similarly to its Moscow cousin, was known as Gastronome No.1. Following the collapse of the Soviet Union and ensued long period of restoration, the store reopened to the public on 8 March 2012.

Now fully back to its former glory, the shop goes by the title of Kupetz (Merchant) Eliseev's Food Hall, complete with seven departments featuring 33 meters of display counters of loose produce and exquisite delicacies. The largest display is dedicated to confectionery and home-made patisserie including classic macaroons. Each department is beautifully decorated with gilded stucco ceilings and glitzy chandeliers, plus many of the original features and equipment used back in the “golden” era!
Image Courtesy of Florstein.
Sight description based on Wikipedia.