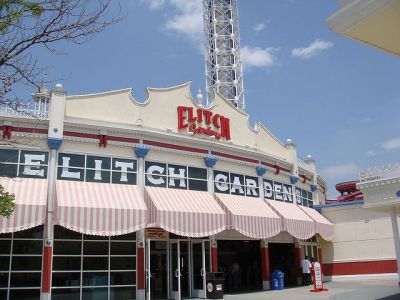 Elitch Gardens was a family-owned seasonal amusement park, theater, and botanic garden in the West Highland neighborhood of Denver at 38th and Tennyson streets. For more than a century Elitch's was one of the most popular entertainment destinations in Colorado. It was nationally known for its lush gardens, the Trocadero Ballroom, the Theatre at the Gardens and the premier wooden roller coaster, Mister Twister. The park moved to downtown Denver in 1994 and later became Six Flags Elitch Gardens. Elitch's Zoological Gardens opened May 1, 1890, on 16 acres (6.5 ha) of former farmland bought by John Elitch and Mary Elitch. It was the first zoo west of Chicago, and it offered the Denver community a unique cultural experience.

In 1916, the park was sold to John Mulvihill, with a provision stating the name could never be changed. New attractions appeared, including the fabulous Trocadero Ballroom in 1917, and two Philadelphia Toboggan Company creations: the Wildcat roller coaster — designed by Herbert Paul Schmeck — in 1922 and a new carousel in 1928. This carousel is still operational at Elitch Gardens. It was during this time the park's enduring slogan was first popularized: "Not to See Elitch's is Not to See Denver."

The 28-acre (11 ha) site of the former amusement park has undergone redevelopment as Highlands' Garden Village. The site won the Environmental Protection Agency's 2005 Overall Excellence in Smart Growth award for its new urbanism development of 308 housing units and a variety of office and retail spaces.
Image by milst1 on Flickr under Creative Commons License.
Sight description based on wikipedia