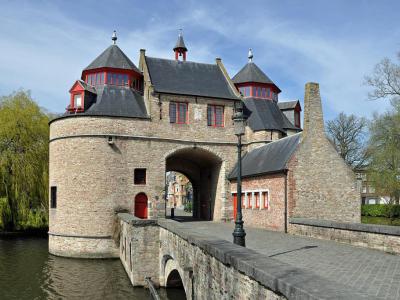 The Ezelpoort, or Donkey’s Gate, is one of the four remaining medieval city gates of Bruges. Unlike the other gates that were built on the banks of the canal, it is completely surrounded by water.

The Ezelpoort was built with the second set of city walls in 1297. It was reconstructed based on the design of architects, Jan Slabbaerd and Mathias Saghen, authors of two other gates, called the Boeveriepoort and the Smedenpoort. It was also called the Ostendpoort because merchants and travelers used to pass through it on the road to Ostend. The gate has been renovated several times. The most recent restoration took place between 1991 and 1993, for which it was awarded the Europa Nostra Award in 1994.

The lower section of the brick gate is the only surviving part of the original structure. It was completely altered in the 17th century. The height of the original gate was lowered. A guard house was added in the early 18th century and the front gate was demolished in the late 18th century. The two round turrets have a simple façade unlike the other city gates. The administrative office of the Anima Eterna , the resident orchestra of the Concertgebouw is located in the main building and today only pedestrian and bicycle traffic is allowed through the gate.
Image Courtesy of Wikimedia and Marc Ryckaert.