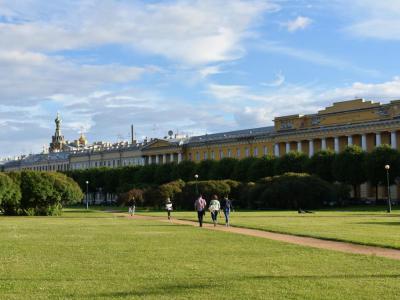 Bordered by the Marble Palace, Suvorova Square, the Pavlovsky Regiment Barracks, and the Moyka River is the peaceful landscape known as the Field of Mars. The Field of Mars, also known as Marsovo Pole, was named after the Mar-Roman god of war.

The Field of Mars began as a marshy field that was drained and then used for public markets, festivities, military exercises, and parades. The grassland was originally named The Grand Meadow, the Pleasure Field, and the Tsarina’s Meadow before receiving its current name.

One of the most stunning elements of the park is the Monument for Revolutionary Victims, a tribute to those who died during the 1917 Revolutions and the following Civil War. The monument was designed by Russian architect Led Rudnev. The memorial contains an eternal flame in the center that was lit during the 40th anniversary of the rebellions. North of the field is the statue of Alexander Suvorov, a great general of the Russian empire who fought in the Russian-Austrian campaign against Napoleon.

In addition, the park contains a burial ground for those who fell in battle during the 1917 Revolutions and Civil War. It is also a custom for newlyweds to visit the park after their weddings to guarantee good luck.
Image by Michael Hoffmann on Wikimedia under Creative Commons License.
Sight description based on wikipedia