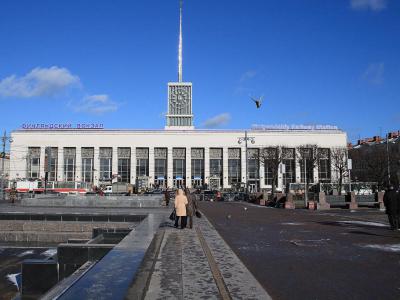 St Petersburg–Finlyandsky or Finland Station is a railway terminal that serves westerly destinations, including Helsinki and Vyborg. Designed by Swedish architects, the station opened in 1870. It was built by Finnish State Railways who owned and operated it until early 1918.

The Finlyandsky station is most famous, primarily, for having been the location where Vladimir Lenin returned to Russia from exile in Switzerland, smuggled by the Germans, on 3 April 1917. This pivotal event in the Russian October Revolution is commemorated by the Soviet statue of Lenin dominating the square in front of the station.

After the turmoil of the July Days, when workers and soldiers in the capital clashed with government troops, Lenin had to flee to Finland for safety, to avoid arrest. He secretly returned from Finland disguised as a railway worker and protected by Eino Rahja and Alexander Shotman on 9 August 1917. Both times Lenin crossed the Russian–Finnish border on the engine #293 driven by Finnish engineer Hugo Jalava. The steam locomotive was donated by Finland to the Soviet Union in 1957, and is now installed as a permanent exhibit at one of the platforms on the station.

In the 1950s, the old station building was demolished and replaced with a new one, inaugurated in 1960. The turreted building is decorated with sculptures glorifying the October Revolution and incorporates a portico preserved from the original 1870 edifice.
Image Courtesy of Wikimedia and Egor Gribanov.
Sight description based on Wikipedia.