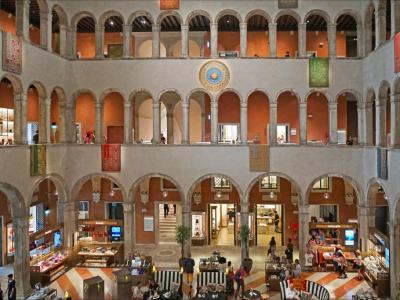 Once headquarters of the German merchant community in Venice, Fondaco dei Tedeschi is a huge building standing just beside the Rialto bridge. Back in the day, German traders were the most influential foreign group in the city and had rented this centrally-located building from as early as the 13th century. After being destroyed by fire, the Fondaco was rebuilt in the 16th century into a functional 4-story edifice with a grand inner courtyard. While architecturally it is typically Italian Renaissance, the basic concept of the building (much as the word 'fondaco' itself) is typically Arabic. Just like Fondaco dei Turchi, the Fondaco dei Tedeschi comprised a palazzo, a warehouse, and restricted living quarters for the inhabitants – mainly merchants from the German cities of Nuremberg, Judenburg, and Augsburg.

Today, this is one of the largest and resplendent shopping centers in Venice specialized in high-end luxury stuff. No wonder prices here are a bit steep, but the place is still a popular hangout, always teeming with tourists.

But don’t let the crowd put you off, at least not before you check out the Fondaco's rooftop terrace for the views it provides, fit to blow anyone away. The 4th-floor Event Pavilion is an exhibition space with a free access to the terrace affording one of the best panoramas of the Grand Canal, the downward view of the Rialto Bridge, and the top of San Marco's Basilica a kilometer or so away – quite a different angle from what you can see at a ground level!

Tip:
To enter the roof terrace you need a ticket – offered for free, but issued for a certain time in order to regulate visitors' numbers and to prevent overcrowding. A word of advice is to pick up your ticket at the top floor first, and then explore the below shopping mall. Otherwise, you can book the ticket online at Fondaco's website. And if you're really lucky to catch a sunset while up on the roof, your efforts will be well rewarded!