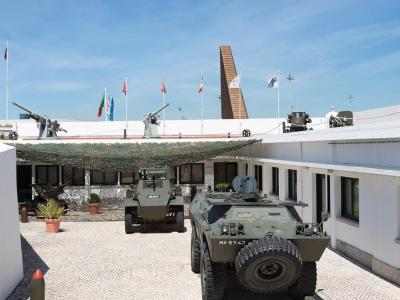 Once used to defend Lisbon from enemies, the Forte do Bom Sucesso houses a museum that sums up much of Portugal's military history. Found nearby is a visually-striking monument to Portuguese soldiers who fought overseas – a place for quiet contemplation about the costs of military conflicts.

The Fort was constructed as a defense post, from 1780 to 1782, under the direction of General Guilherme de Vallerée, and had been fitted with different types of artillery to strengthen its military capability. A residence for the Fort governor, inside the perimeter, was added soon after. The polygonal outline of the Fort follows that of the right bank of the River Tagus.

During the Portuguese Colonial War (1961 – 1975) the Fort served as the headquarters of the Military Postal Service. After the Carnation Revolution on 25 April 1974, which overthrew the authoritarian Estado Novo regime, it hosted the Command of the Military Intervention Group, a body set up by the Revolutionary Council to maintain law and order. Later, it was the headquarters of the Association of 25th of April, an organization that brought together the members of the military who initiated the Carnation Revolution.

On January 13, 1999, the Fort was officially handed over to the Portuguese League of Combatants. The League-run museum offers a permanent exhibition indoors, as well as three external areas with equipment related to the various branches of the Armed Forces. The permanent exhibition covers World War I, the colonial campaigns (known in Portugal as the overseas campaigns), and peacekeeping missions. The museum also has social areas, conference and projection rooms, as well as a bar.