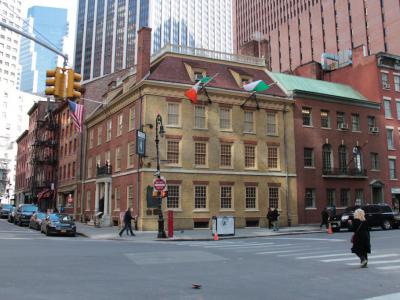 Fraunces Tavern is a landmark museum and a restaurant in the Financial District of Lower Manhattan, sitting on the corner of Broad Street at 54 Pearl Street. Opened in 1762, this location features much of the revolutionary history of New York before, during and after the American Revolution, and was once headquarters for George Washington, a venue for peace negotiations with the British, and a federal office in the Early Republic.

On the inside, Fraunces happens to be bigger than it looks on the outside, with lots of rooms for dining and/or drinking, named for the historic visitors and war heroes, decorated with white linens and chandeliers. Whilst here, you may wish to see the lobby frequented during the American Revolution by the likes of George Washington, or the Long Room in which he and his 185 friends gathered for a celebration dinner on November 25, 1783 after the British had left New York, known since as the “Evacuation Day”.

Washington himself was a big fan of Fraunces’ cooking and even made the innkeeper his presidential steward. He generally liked taverns and booze, and even named his three dogs Tipsy, Tippler and Drunkard. As part of the American Whiskey Trail and the New York Freedom Trail, Fraunces is a must-go for history, beer, and whiskey lovers. The whiskey bar has the best selection in NYC, and the tavern’s beer selection is historic just as well. The restaurant serves traditional American menu, offering meatloaf, steak (Fillet Mignon on a Stone is highly recommended!), various sandwiches and salads, plus desserts (creme brulee and pecan pie in particular).

The museum interprets the building and its history, along with varied exhibitions of art and artifacts. Just take your time and enjoy the quiet. Come here and you'll love it!
Image Courtesy of Flickr and KatieThebeau.