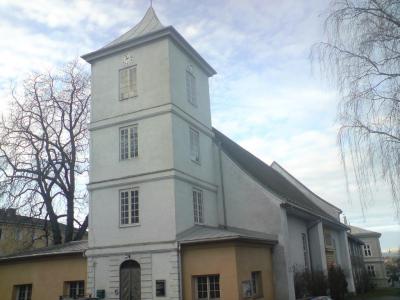 Gamlebyan Church, also known as Old Town Church, is a private church that is part of Oslo University Hospital. The church was built on the foundation of a Franciscan monastery that dates to 1290. However, the building itself was completed much later in 1796 using the Louis XVI architectural style.

The church has not been in use since 2014. This is partially due to the fact that it is aged, but also that it only has seating for 200 people. It may be difficult to gain entry into the church to see the inside. However, it is worth walking by the Old Town Church to see the church and the medieval ruins on which it was built. Those who can take a look inside will see the suspended pulpit, which was added in the 19th century.

Gamlebyan Church is located in Gamle Oslo, or Old Oslo. Visitors can explore many of the Old Town landmarks and relics while touring the area on foot. Some of these include Minneparken, Middlealderparken, Kongsgarden and the Ruins of Cleminskirken.
Image Courtesy of Wikimedia and PaulVIF.