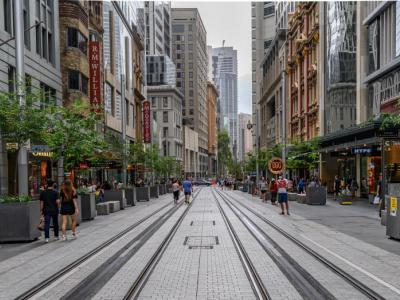 Editor's note: The major construction works here are still undergoing and it is not known when they will end.

George Street is a central business artery of Sydney and one of the busiest streets in the city centre. Stretching for about 3 km, it connects a number of Sydney's most important buildings and precincts, including Railway Square adjacent to the Sydney Central station and ringed by hotels and small shops; Sydney's Chinatown; Cinema District – home to three largest cinemas in Sydney, as well as numerous video arcades, Internet cafes, fast food restaurants and pubs; Town Hall – noted as the location of three important historic buildings: St Andrew's Cathedral, the Sydney Town Hall, and the Queen Victoria Building shopping centre; Wynyard – the area interspersed with retail, large hotels and large-scale bars and entertainment facilities; and The Rocks – location of the first British settlement in Australia begun in 1788, packed with souvenir shops, restaurants and traditional pubs, as well as art galleries and the Museum of Contemporary Art, dominated by the approaches to the Sydney Harbour Bridge, and facing the Sydney Opera House across Circular Quay.
Image by lifeasdaddy on Wikimedia under Creative Commons License.
Sight description based on wikipedia