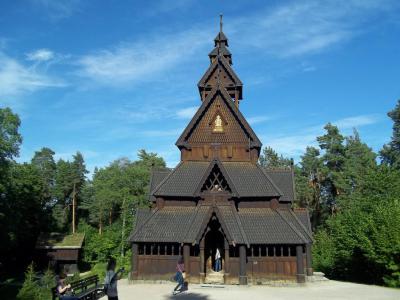 The Gol Stave Church is housed within the Norwegian Museum of Cultural History, an open-air 'skansen', or living museum, which contains several ancient buildings from across the nation. The church dates back to the early 13th century. A stave church by design, it is a timber-framed, many-tiered construction. Stave churches were widespread in medieval Scandinavia, but few have survived intact. Originally built and located in the small village of Gol in Southern Norway, it was saved from demolition by the Society for the Preservation of Ancient Norwegian Monuments, who bought the building outright in 1880.

Now relocated to the Museum of Cultural History, it arrived here via King Oscar II, who bought the church and moved it to his own private open-air museum. Eventually, this museum was merged with the church’s current home. One of the best-preserved timber churches in the entire country, it is one of the museum’s most notable attractions. Its popularity is such that in its original home village of Gol, a modern replica has been built as a tourist attraction. It was constructed in the 1980s, a hundred years after the church was sold off and replaced with a new building.

Why You Should Visit:
Great to start your learning about Norway's old churches in an intimate atmosphere.
Numerous runic inscriptions & carvings dated to the early Middle Ages can be seen inside!
Image by Mark Healey on Flickr under Creative Commons License.
Sight description based on wikipedia