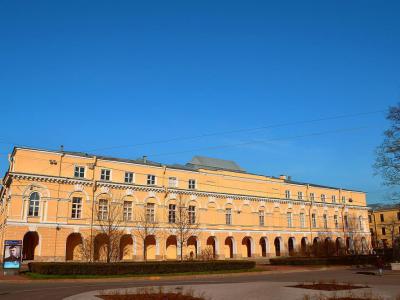 Gostinyi Dvor – a historic Russian term for "indoor market", "guest court" or "merchant yard" – is the name commonly applied to the vast department store in St. Petersburg. The latter holds the distinction of being the world’s first shopping center, operational for over 250 years.

Sprawling at the intersection of Nevsky Prospekt and Sadovaya Street for over one kilometer and encompassing the area of 53,000 m2 (570,000 sq ft), this indoor complex originally comprised more than 100 outlets. It took 28 years to build, starting from 1757, during which the initial elaborate design by Bartolomeo Rastrelli was discarded in favour of a more cost-effective Neoclassical solution by Jean-Baptiste Vallin de la Mothe.

In the course of the 19th century, Gostiny Dvor was continuously augmented, ultimately incorporating ten indoor streets with as many as 178 shops. By the turn of the 20th century, the place, however, had lost much of its popularity to the more fashionable Passage located nearby.

After the October Revolution of 1917, Gostiny Dvor remained boarded up for several years and was severely damaged during World War II. The post-war reconstruction of 1945-1955 had its inner walls demolished, producing a vast commercial space. The massive structure got another face-lift later in the century and entered the new millennium as one of the most fashionable shopping centers in Eastern Europe.

Here, you can buy practically anything, from knitting needles to party supplies. Among other amenities, there are tailor services, foreign exchange, and a food court. Additionally, the place offers art and craft classes for children and parents to enjoy. The mall is open until 10 o’clock every night.
Image by GAlexandrova on Wikimedia under Creative Commons License.
Sight description based on wikipedia