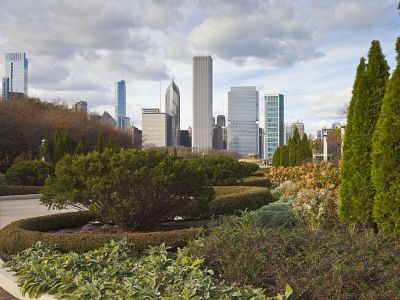 Located within the city's central business district, Grant Park is popularly referred to as “Chicago's front yard.” Upon its foundation on April 29, 1844, the park was initially called Lake Park and changed its name to Grant Park, in honor of the American Civil War General and United States President, Ulysses S. Grant, only on October 9, 1901.

In the early 20th century, the park expanded with more landfill to provide sites for the Adler Planetarium, Field Museum of Natural History, and Shedd Aquarium, which in 1998 were incorporated into the Museum Campus. In 2004, a section of northern Grant Park was covered and redeveloped as Millennium Park. Among other notable features at Grant Park are the Clarence Buckingham Fountain, the Art Institute of Chicago, and a monument to the 16th president of the United States, Abraham Lincoln.

Why You Should Visit:
Perfect for a date, a solid stroll, a run, a bike ride, a family outing...
Plenty of places to grab a spot for a picnic and spend some quiet, relaxing time.
There are hundreds of events all summer long and plenty in the winter as well.

Tip:
Bring a towel/blanket to sit on for concerts and to take a break under a tree.
If you like biking, try the lakeside route – it's great!