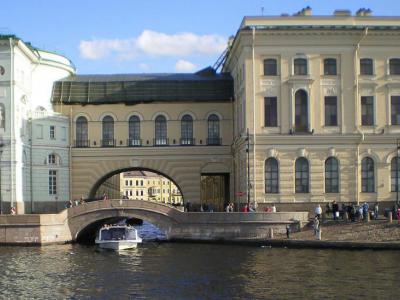 The Hermitage Bridge is a stone overpass that graces the gorgeous Winter Canal, which streams into the Neva River. It is located between the Hermitage Theatre and the Old Hermitage. Originally named the Upper Embankment Bridge, it is one of the oldest stone bridges in St. Petersburg and one of 315 bridges in the city. The original name was never popular with the people. Therefore, from the 18th century on, the bridge was known as the Palace Bridge. The current name was instituted in 1929.

The original bridge was a three-span wooden bridge that was constructed during 1718 to 1720 by Herman van Boles. The original arches of the bridge were brick and limestone and featured a granite facing. The stone bridge was built during 1763 to 1766. The bridge was replaced with reinforced concrete in 1934 by project engineer AD Saperstein and architect K. M. Dmitriev. In 1950, the original furnishings of the ramps were restored.

Each year, thousands of tourists and photo enthusiasts enjoy the spectacular views and stunning photo opportunities the Hermitage Bridge offers. One can easily see waterfront views of the nearby Palace Embankment where the Summer Garden and Winter, Vladimir, Novo-Mikhailovsky, New Michael, and Marble Palaces are located.
Image by Андрей! on Wikimedia under Creative Commons License.
Sight description based on wikipedia