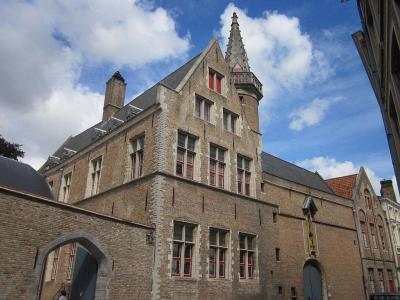 The Hof Bladelin is a large mansion in Bruges. It is now a convent and home for the elderly with a small museum inside.

The Hof Bladelin was built in 1451 as the house of Pieter Bladelin and his wife, Margaret of Vagewierre. He was the counselor and treasurer of Philip the Good, the Duke of Burgundy. At the time, he was one of the richest men in the area and laid the foundations of a town called Middleburg. The Hof Bladelin was constructed on reclaimed land, located in the northern part of the city. The couple did not have children and the property was inherited by Bladelin’s sister after their death. The Medici’s, a powerful Florentine banking family, bought the house in 1472. Today it accommodates a convent, managed by the order of Sisters of Our Lady of 7 Sorrows that runs an elder care facility in the building.

The Hof Bladelin has the architectural design of a Gothic castle. The Renaissance courtyard was designed in Italian style and added to the building by the Medici family. The stone medallion portraits of Lorenzo de Medici and his wife are still found in the courtyard. The ribbed vaulted ceiling in the interiors has some unique corbels. They are adorned with scenes depicting the duties of Bladelin and the life of St. Alphege of Canterbury.
Image Courtesy of Wikimedia and Zeisterre.