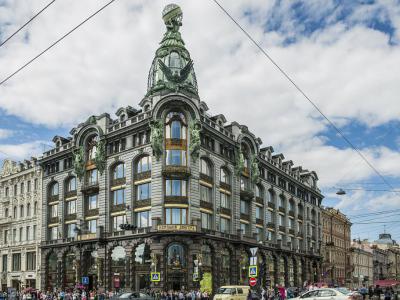 The House of Book (Russian: Dom Knigi) is one of the first bookstores in Russia and the most prominent one in St. Petersburg.

Originally, the building was meant to accommodate the Russian branch of the Singer Sewing Machine Company, and was initially conceived as a skyscraper, similar to the Singer headquarters in New York City, then still under construction. However, the architectural regulations of Saint Petersburg of the day prohibited building anything taller than the Winter Palace (Imperial residence).

The architect Pavel Suzor came up with an elegant solution – a six-story, loft-style modernist Art Nouveau building crowned with a glass tower, topped with a glass globe created by Estonian artist Amandus Adamson. This gave the impression of a substantially taller structure, without physically obstructing anything nearby.

Constructed between 1902 and 1904, the building remained property of the Singer family until 1919, and was briefly occupied by the US Embassy during World War I. In 1919, it was passed to the Petrograd State Publishing House to become the city's largest bookstore, and was subsequently renamed "The House of Book" in 1938.

Other than the bookstore, it had also housed several of Leningrad’s publishing houses, a music store, and a store for foreign literature. Remarkably, the bookstore remained operatinal even during the Siege of Leningrad, up until November 1942; it reopened again in 1948. After the most recent reconstruction in 2004-2006, it is now also home, apart from the House of Book (on the two lower floors), to the Café Singer and Vkontakte – the Russian social media service – occupying the top five floors.

The store sells books in English, French, German, and many other languages, as well as postcards, calendars, handbooks, greeting cards, and children’s books. English speaking staff are available to help foreign visitors.
Image Courtesy of Wikimedia and Ninara.
Sight description based on Wikipedia.