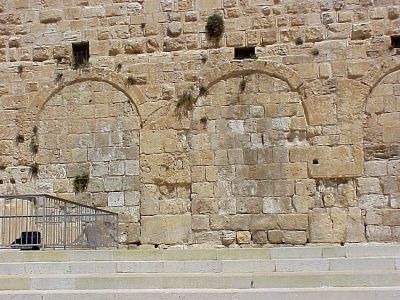 The Huldah Gates were once part of Herod's temple's main infrastructure and represent two sets of the now blocked gates – the so-called double- (western) and triple-arched (eastern) gates – in the southern wall of the Temple Mount in Jerusalem's Old City. Both, the Double and the Triple gates are external elements of the expansion wall built by Herod around the original Temple Mount.

A monumental staircase was added hereto around the end of the 1st century BC to enable thousands of pilgrims to walk in and out of the Temple. During holidays and busy days, the eastern gates were used for entering, while the western only for exiting. The only exception was made for those in mourning, who were allowed to enter in reverse order, so that the public (exiting the Temple) would know about their loss and wish them well. The eastern (entry) side was narrower, in part, probably because the entrance was regulated, and the visitors had to purify themselves prior to entering God's place. For that purpose, there were dozens of ritual baths, called Mikveh, installed around the entry, after visiting which people would get a certificate. In quieter days, with fewer visitors, the entry was allowed only through the middle arch.

The 19th century excavations discovered an erratic series of passageways under the Triple Gate, some leading below the wall and beyond the Mount's southern edge. The passageways from both gates are now converted to mosques. The original Hulda Gates were north of the royal colonnade, an impressive large (15 meters in length) structure, which stood 6 meters above street level at the southern end of the Temple Mount during the end of the Second Temple era.

The gates are named after the prophetess Hulda who lived in Jerusalem in the days of King Yoshiyahu and is believed to have been buried in the City of David neighborhood (south of the Temple Mount), which in turn explains why the southern gates to the Temple are named in her honor.
Image by Wikipeder on Wikimedia under Creative Commons License.
Sight description based on wikipedia