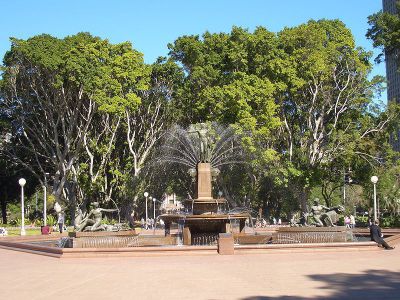 Hyde Park, the oldest public parkland in Australia, is a 16.2-hectare (40-acre) park in the central business district of Sydney, New South Wales. Hyde Park is on the eastern side of the Sydney city centre. It is the southernmost of a chain of parkland that extends north to the shore of Sydney Harbour via The Domain and Sydney's Royal Botanic Gardens. Hyde Park is approximately rectangular in shape, being squared at the southern end and rounded at the northern end.
Image by J Bar on Wikimedia under Creative Commons License.
Sight description based on wikipedia