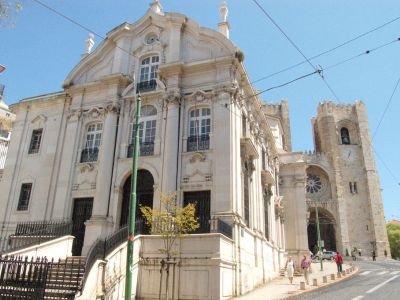 The Church of Santo António is a Roman Catholic temple dedicated to Saint Anthony of Lisbon (also known as Saint Anthony of Padua). According to tradition, the church stands on the site where the saint was born, in 1195.

António, whose secular name was Fernando de Bulhões, came from a wealthy family. In 1220, while studying in Coimbra, he entered the Franciscan Order, adopting a new, clerical name. His missionary travels led him to Italy, where he eventually settled, in Padua. Due to his immense popularity, António was canonized less than a year after his death, in 1232.

The site of his family home, very close to Lisbon Cathedral, was turned into a small chapel in the 15th century. In the early 16th century it was totally rebuilt, though, leaving nothing to date of the original structure.

In 1730 the church was further modified and redecorated. During the 1755 Lisbon earthquake it was almost totally destroyed, with only the main chapel left standing. The church was fully rebuilt after 1767, in a Baroque-Rococo style, which the form we see it in today.

June 13 is officially Saint Anthony's day and is one of the "Popular Saint Festivities" celebrated in Lisbon. Ever since 1755, on this day, each year a procession, honoring of the saint, starts from the church, passing by the Cathedral, and then meandering down the slopes of Alfama neighborhood.

The church was classified as a National Monument in 1982, following a visit by Pope John Paul II. During the visit, the Pontiff inaugurated the statue of Saint Anthony outside the church, in the square, and prayed in the crypt, which marks the spot where the saint was born.

Tip:
A small museum inside displays images and manuscripts related to the life of St Antonio – the patron of lost things – while also allowing visitors to view the gold and silverware belonging to the church.
Image Courtesy of Wikimedia and Miss Quarrel.
Sight description based on Wikipedia.