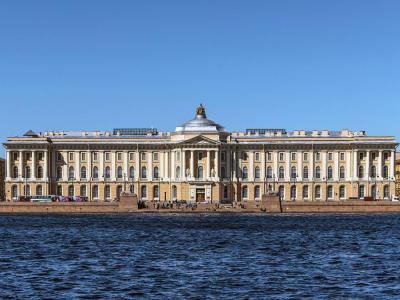 After the Revolution of 1917, the Imperial Academy passed through a series of transformations. It was formally abolished in 1918 and replaced with the Petrograd Free Art Educational Studios (Pegoskhuma) which was further renamed the Petrograd Svomas (Free Art Studios) in 1919, then the Petrograd State Art-Educational Studios of the Reconstructed Academy of Arts in 1921, Vkhutein in 1928, the Institute of Proletarian Fine Arts in 1930, the Russian Academy of Arts in 1933, and then the Academy of Arts of the USSR in 1947. After the Academy was moved to Moscow that year, the building was renamed the Ilya Repin Leningrad Institute for Painting, Sculpture and Architecture, in honor of one of its well-known alumni.

Today it is known officially as the Ilya Repin St. Petersburg State Academic Institute for Painting (or Fine Arts), Sculpture and Architecture. The Academy museums boasts one of the world's largest collections of books, music and historic documents, some dating back as far as the 1400s. Some of the museum’s collections came from the Royal Family. Particularly impressive are the authentic 3,000 year-old Egyptian sphinxes. Among the rare treats awaiting visitors here are the canvases by Monet, Renoir, Van Gogh and many other international grands. An average of six million visit the museum each year.
Image Courtesy of Wikimedia and Florstein.
Sight description based on Wikipedia.