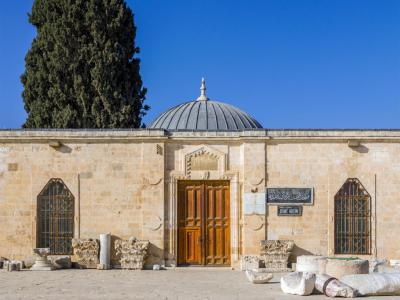 Sited on the Temple Mount toward its Moroccan gate (or to the right of al-Aqsa Mosque), this small museum has an excellent range of rare exhibits/artifacts from ten periods of Islamic history – from 16th-century copper soup kettles, to coins, stained glass windows, wooden panels, ceramic tiles and iron doors from the reign of Suleiman the Magnificent. Also on display are a cannon used to announce the breaking of Ramadan, a large collection of weapons, a large wax tree trunk, the charred remains of a minbar built by Nur ad-Din Zangi in the 1170s and destroyed by an Australian tourist in 1969, and the blood-stained clothing of 17 Palestinians killed in the rioting on the Temple Mount in 1990.

Also of note are the museum's 600 Qur'an copies donated to the al-Aqsa Mosque during the Umayyad, Abbasid, Fatimid, Ayyubid, Mamluk, and Ottoman eras by caliphs, sultans, emirs, ulama and private individuals – each differing in size, calligraphy, and ornamentation. One such copy is a hand-written Qur'an whose transcription is attributed to the great-great-grandson of Muhammad, while another is written in Kufic script dating back to the 8th-9th century. In addition, there is a very large Qur'an measuring 100 by 90 cm (3.3 ft × 3.0 ft), dating back to the 14th century.
Image Courtesy of Wikimedia and Andrew Shiva / Wikipedia / CC BY-SA 4.0.