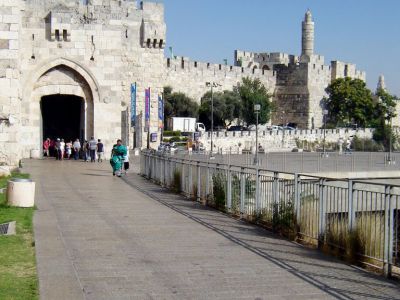 The Jaffa Gate is one of the eight points of entry to the Old City Jerusalem, and was built by the Ottomans in the 16th century. It is also the only structural opening in the wall surrounding the city that is set at a 90 degree angle; no doubt, this was done as a defensive measure. Located on the western side, it faces in the direction of the eponymous town of Jaffa – hence the name.

The gate goes by several other different names as well, including “Sha'ar Yafo” in Hebrew and “Bab el-Khalil” in Arabic which means "the gate of a friend." The ''friend'' part refers to prophet Abraham, “the friend of God”. Legend has it that the prophet was buried here somewhere, and since Hebron was his hometown, another name for this place is the "Hebron Gate." It is also often referred to as the “prayer niche of David.” During the Crusader period, it was known as “David’s Gate” because of its proximity to the Tower of David.

It was also from this spot that the Biblical character Jonah embarked on a sea voyage, and pilgrims used to debark here on their trip to the Holy City as well. Even today, the old road starting from the gate is still in use, converted to a superhighway linking Jerusalem with Tel Aviv.
Image by Orientalist on Wikimedia under Creative Commons License.