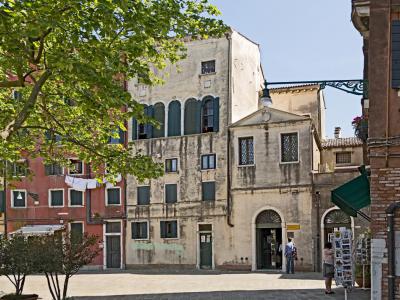 Sitting in the middle of the old Jewish Ghetto, between the two ancient Jewish synagogues, the Jewish Museum of Venice was founded in 1953 by the Jewish Community of Venice. Its exhibition shows the Jewish community's life between the 16th and 20th centuries.

The first room of the museum is dedicated to silverwares reminding the most important Jewish festivities starting from Shabbat. The second room is mostly dedicated to traditional Jewish textile manufacture. One can find different examples of Meil and other precious coverings used to decorate the Torah, but also beautiful examples of Parokhet – curtains to cover the doors of 'Aron Ha Kodesh.

During WWII, when Venice was occupied by Nazis, they asked the head of the local Jewish community, Giuseppe Jona, to bring a list of all Jews living in Venice to the Nazi headquarters. A well-respected physician, Giuseppe Jona had the list, but instead of turning it over to Nazis, he burned it and took his own life.

Because of his sacrifice, the Nazis were not able to locate the Venetian Jews, and so only 243 of them were rounded up and deported, while about 1200 others managed to escape. Only 8 of the 243 who were taken to Auschwitz returned home after the war.

Why You Should Visit:
Aside from the museum's exhibition of old Jewish life in the ghetto, you get to tour three ancient synagogues for a small extra fee.
The Ghetto Nuovo square is a beautiful little spot regardless of whether you enter the museum and is relatively quiet (compared to other parts of the city).

Tip:
Make sure to give yourself time to wander around the ghetto area itself, as there are quite a few cute/unique restaurants and bodegas.